First Lady Sandra Granger on Saturday commissioned the ‘Liza Destiny’, the first in a series of Floating Production Storage and Offloading (FPSO) vessels for ExxonMobil Guyana at the Keppel Shipyard in Singapore.

The vessel will depart Singapore in July and is expected to arrive in Guyana in September to prepare for the commencement of oil production for the Liza Phase 1 project in the Stabroek Block by the first quarter of 2020.

Mrs. Granger was accompanied by Director of the Department of Energy, Dr. Mark Bynoe. 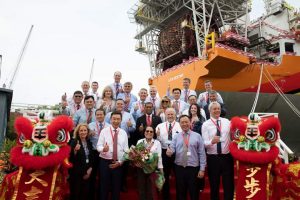 In her remarks at the commissioning and naming ceremony, the First Lady said that the vessel has been aptly named as it represents what Guyana can become in the years ahead with the expected revenues and its impacts on the country.

“I want to thank all the hearts and minds that came together to put this project together. I hope that it will benefit not only the partners and their profits but also the Government and people of Guyana. I think it is a fitting name for our country because we are talking about destiny, we are talking long term and we are talking what I believe is vision not only for production but the process behind it. I hope this ship will bring to us the people of Guyana not only prosperity in a physical sense but greater cohesion, greater development and of course, the sustainability of our country and the culture that we all desire. I hope that we will succeed together in this venture,” she was quoted as saying in a Ministry of the Presidency release.

Mrs. Granger noted that the vessel in itself will encompass the destinies of the country and all its stakeholders.

President of ExxonMobil’s Upstream Oil and Gas Company, Liam Mallon, said in his remarks that the commissioning and the journey of the vessel is a significant event and marks a new beginning for Guyana.

“This is an important juncture and the boat has a great journey ahead of it. The work that has been done on this vessel is staggering. It is an absolutely remarkable achievement that this is ready to sail within less than 5 years of discovery to production. I personally haven’t seen numbers like this since the 1990s. You have set a new industry benchmark. This couldn’t have worked without partnership. This just doesn’t happen. It happens with great teams, enormous trust and enormous respect,” he was quoted as saying in the government release.

Mallon noted too the name for the FPSO was deliberately chosen in keeping with what it means not just for the company but Guyana and its population.

“Over 1000 Guyanese have worked on this project in various parts in the world. We think long term and we think about the destiny of a country like Guyana. This is the first of many developments. This is a long term partnership. The boat is designed to produce for decades and so our destinies have been and continue to be linked to Guyana for many years to come,” he said.

Chief Executive Officer of Dutch Company SBM Offshore, which was contracted to construct the ship, Bruno Chabas said that the ‘Liza Destiny’ was converted from an oil tanker, previously called ‘Tina’. He outlined that engineering and design began in December 2016 and work began in June 2017.

During this time, over 3000 persons have worked on the vessel.

The vessel can produce up to 120,000 barrels of oil per day and has a storage capacity of 1.6 million barrels.

Phase 2 of the Liza development is expected to start up in mid-2022 and will develop approximately 600 million barrels of oil through the ‘Liza Unity’, the second FPSO in the series.

The 13 discoveries on the block to date have established the potential for at least five FPSO vessels producing more than 750,000 barrels of oil per day by 2025.

Following the opening ceremony, the First Lady and the Director of the Department of Energy were taken on a guided tour of the Liza Destiny.