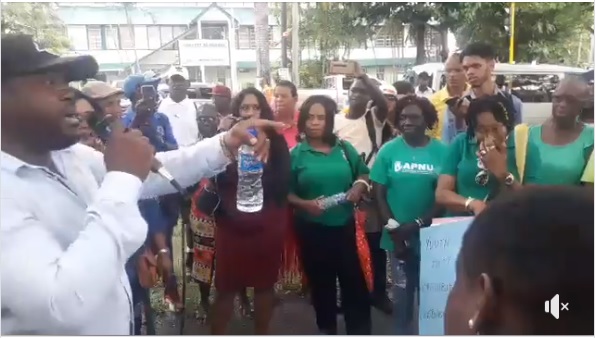 PNCR’s James Bond addressing a group of persons after they picketed a short distance from the office of the Guyana Elections Commission, Kingston, Georgetown.

With the backing of just under 100 supporters, the governing coalition on Friday signaled that it was prepared to mount a legal challenge to any attempt to block the Guyana Elections Commission (GECOM) from preparing for general elections that are expected this year now that the Caribbean Court of Justice (CCJ) has ruled that the six-month-old no-confidence motion was validly passed and the GECOM Chairman’s appointment was unconstitutional.

“We must have a lawful, free, fair and credible elections and no man is going to circumvent GECOM. No man will circumvent GECOM. We will take whoever to court if they tell us that GECOM can’t do their work. We will go to court,” said James Bond of the People’s National Congress Reform (PNCR), the biggest party in the governing coalition.

Reacting to the CCJ’s ruling that the no-confidence motion was valid, President David Granger has insisted that elections would be held after house-to-house registration to deal with defects in about 200,000 names and the exclusion of youths who have attained the age of 18 years and are eligible to vote. He did not say how he arrived at 200,0000 names. Opposition Leader Bharrat Jagdeo has called Granger’s position a “flagrant lie” because two cycles of continuous registration were aimed at capturing those who were 14 years old and their names have since been shifted to the voters’ roll.

The CCJ is expected to hand down orders next Monday afternoon, if lawyers representing the government and the parties do not agree to a proposed set of orders that should flow from the judgements.

Bond also threatened more street protests if the country’s elections management authority was blocked from preparing for general elections. In what sounded like a carefully worded impromptu speech to the protesters who picketed GECOM’s headquarters just beyond police barriers at Camp and Lamaha Streets, Georgetown, Bond urged supporters not to appear weak in the eyes of the opposition People’s Progressive Party (PPP). 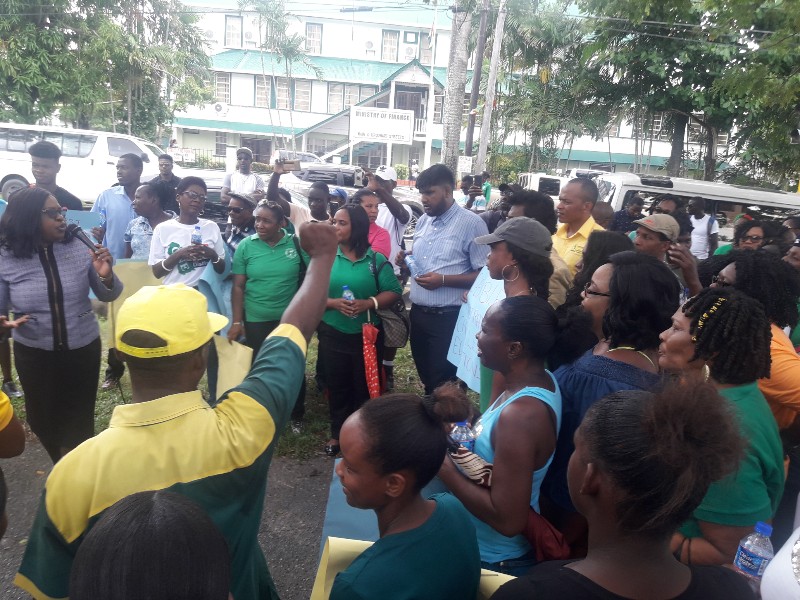 Foreign Affairs Minister, Dr. Karen Cummings, who joined the picket line, told reporters that she has been briefing the diplomatic community about the political situation in Guyana; the latest being the European Union Ambassador to Guyana, Jernej Videtič.

“We want to ensure that those who need to vote will vote. We also want to let them know that the (voters’) list expired on April 30 so right now we have no proper list. It’s an illegal, corrupt list so we want that list to be sanitized and so that’s why we marched here. We have a mission. We want credible elections. We want to give everybody a chance to vote; credible registration, credible elections, so let’s continue the fight,” said Cummings.

AFC Executive Member, Sherod Duncan warned that “we stand a greater chance of being disenfranchised if we go to elections without a proper list” to justify his call for young people to be given a fair chance to cast their ballots.

He told the supporters that it is the GECOM Chairman who always advises the President about the elections management authority’s readiness for general elections. “We are going to wait until the Chairman of GECOM says that we are fit and proper 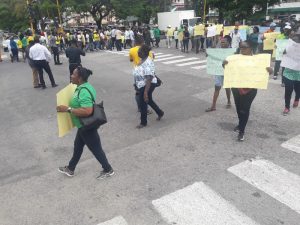 and ready. Jagdeo wants elections tomorrow and he has created a situation where they are saying that the GECOM Chairman has been appointed improperly. He has created the situation and he is calling for elections as soon as possible. Well, you can’t have it bake and cake. Present your list and when you present your list, the President will act in his own deliberate judgment on the list and we will take things from there,” said Duncan who was recently elected to head the Region 4 Chapter of the AFC.

The CCJ has ruled that President Granger’s unilateral appointment of James Patterson as GECOM Chairman was flawed and unconstitutional because the Guyanese leader had not given reasons for rejecting Jagdeo’s 18 nominees. The court, in its judgement, has said that in keeping with the constitutional provision for an inclusionary democracy, evolution of the constitutional reform process and the general trend towards openness and transparency, the Opposition Leader and the President should decide on the list after which the agreed list would be formally presented to the President for him to pick one as the GECOM Chairman.