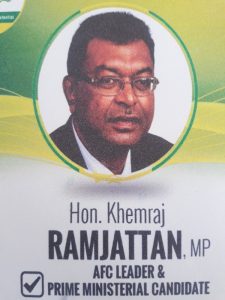 The Alliance For Change (AFC) on Saturday elected Khemraj Ramjattan as its leader and Raphael Trotman as its Chairman, a party spokesman disclosed.

Their election followed a decision by other contenders for both posts to withdraw from the race.

Ramjattan and Trotman, who co-founded the AFC with the late Sheila Holder, have over the years switched posts of leader and chairman.

Up to earlier Saturday, Trotman was the AFC leader.

Ramjattan is also interested in being the governing coalition’s Prime Ministerial candidate to replace incumbent Moses Nagamootoo. Trotman is on record as backing Nagamootoo, saying it would send a wrong signal that the coalition was subscribing to the perception that the David Granger-Nagamootoo combination performed poorly since coming to power in 2015.

Those, who had contested for the post of AFC leader, were Trotman, Cathy Hughes and David Patterson.

Hughes and Patterson had also vied for the post of Chairman.

Ramjattan is a long-serving Guyanese politician, having begun his career in the now opposition People’s Progressive Party.

Less than one hour before the AFC’s National Conference began at the St. Paul’s Roman Catholic Seminary at Vryheid’s Lust, East Coast Demerara, Ramjattan’s supporters were campaigning for him outside the venue.

A handout solicited votes for Ramjattan, saying he offers decisive leadership, and that he will be “pivotal in helping to negotiate the coalition which brought the AFC into government,” “resourceful in attracting funds for the AFC”, “ready to energize the AFC from grassroots with a dynamic team”, “a man of integrity who delivers on his word” and “strong on crime and security for the nation”.