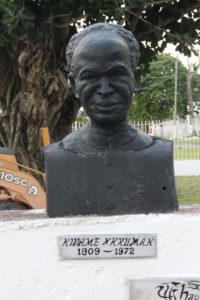 Sprucing up of Georgetown, including round-the-clock rehabilitation works at the Non-Aligned Monument, continued Thursday in preparation for next week’s State visit by Ghana’s President Nana Addo Dankwa Akufo-Addo.

The West African leader is scheduled to be in Guyana from June 11 to 12 for wide-ranging discussions on areas of possible mutual cooperation including the energy sector.

Housing Minister, Annette Ferguson and City Mayor, Pandit Ubraj Narine confirmed Thursday that President Akufo-Addo is due to lay a wreath at the Non-Aligned Monument, Company Path, Georgetown. “His Excellency, the President of Ghana will be paying a visit here and the city must be in order so we are busy cleaning up various locations in the City which I think is overdue,” he told Demerara Waves Online News.

The Mayor said City Hall was collaborating “as a team” with the Ministry of Public Infrastructure and the Ministry of Communities to rehabilitate and elevate the pathway at the Non-Aligned Monument, painting the monument, trimming the trees, desilting drains and erecting flagpoles.

Among the founding fathers of the now dormant Non-Aligned Monument was Ghana’s then President, Kwame Nkrumah, whose bust is among those at the edifice. 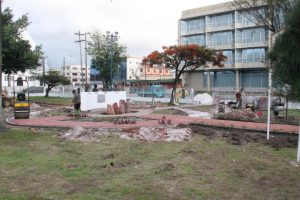 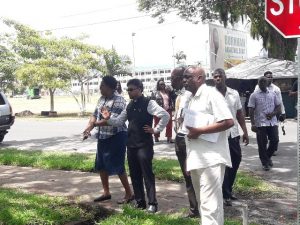 Junior Minister of Communities, Annette Ferguson, City Mayor Ubraj Naraine and other central and local government officials on a site visit at Middle and Carmichael Street.

Ferguson and Narine, accompanied by several city and central government officials, also paid a visit to Carmichael and Middle Streets to examine the type of works that are needed there. “The monument out there represents Ghana, along with Guyana, and also representatives from India, they would have had freedom fighters representing their various countries so that’s the significance of that monument out there,” Ferguson told Demerara Waves Online News.

On Main Street, municipal workers were seen whitewashing tree trunks, concrete benches and pillars. The grass along Main Street avenue was well manicured and the otherwise rough patches of road in the vicinity of the Bank of Guyana and the National Library were asphalted.

At Mandela Avenue and the East Bank Demerara Road, public infrastructure workers were seen replacing months’ old damaged barriers at the head of the junction.