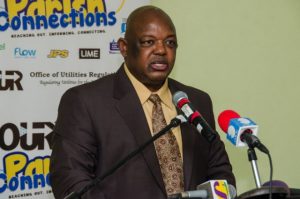 Guyana Power and Light Inc. on Wednesday said fixing the damaged submarine cable-link between Kingston and Vreed-en-Hoop power stations will take several weeks, and so efforts are being made to boost generation capacity.

Chief Executive Officer, Albert Gordon told a news conference that as part of its emergency response, the power company is hoping to seal power purchase agreements with a number of private electricity producers, including Giftland and Banks DIH, once the price is right. He indicated that the power company appeared closer to inking an agreement with Giftland, barring some legal, regulatory and pricing constraints.

The power company says other efforts include building out a 13.8 kV cable to connect Vreed-en-Hoop power station to the Wales power station, West Bank Demerara and then crossing the Demerara River to the Garden-of-Eden power station to supply 6 megawatts, and the return of two generators with 2 megawatts capacity from Anna Regina.

Officials said the cable is already available to run the 5,000-foot long link between Wales and Garden-of-Eden.

Also part of the plans to ease the power woes of as much as eight-hour long blackouts in Demerara and Berbice since the existing submarine cable was damaged last Sunday, are the resumption of a 7.8 megawatt generator by next Wednesday and repairs to the alternator of a 6.9 megawatt generator by mid-July.

“In the meantime, as we said, we are doing all we can to get the power over,” Gordon said. “The cable, bringing back the two units and bringing back the unit that is out on maintenance; once we have those done, there should be a significant improvement,” he added.

Gordon said the Kingston–Vreed-en-Hoop submarine cable repairs could take several weeks. “We’re pushing them but will take a few weeks where we are trying to not go past a month but they have to do mobilisation and all kinds of things which they said they have to do,” he said.

GPL officials believed that the submarine cable was damaged by a ship that might have passed or dropped anchor in the Demerara River, Guyana’s busiest river. The officials said they were working with the Maritime Administration (MARAD) to do georeferencing of the cable to provide that information to mariners.