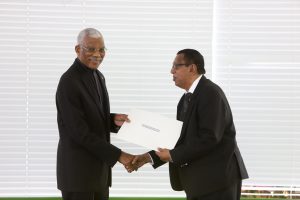 Senior Counsel Rajendra Nath Poonai has sued the privately-owned Kaieteur News newspaper for GYD$45 million for defaming him in an article that he was convicted of fraud in Canada.

Already, the High Court has granted an injunction restraining the National Media and Publishing Company, which publishes the Kaieteur News, its owner Glen Lall and Editor-in-Chief, Adam Harris from continuing to publish the offending words published on May 23, 2019.

Poonai, through a battery of lawyers, wants the High Court to award him GYD$15 million each for defamation contained in the article headlined “Attorney convicted of fraud in Canada, appointed Senior Counsel” on page 1, the article itself on page 16, and exemplary and aggravated damages in excess of $15,000,000.

“Beginning from approximately 2 a.m. on Thursday 23rd May, 2019, the Claimant has been inundated with phone calls, text messages, Facebook messages, emails and WhatsApp messages concerning or related to the articles and the truthfulness and/or veracity of the article.

From the morning of Thursday 23rd May, 2019 up to present time scores of persons including the Claimant’s friends, family, colleagues, prominent members of the business, legal and medical communities, members of the diplomatic community and government have brought the said headline and article to the Claimant’s attention and have sought information regarding the veracity of same.

On Thursday 23rd May, 2019 and Friday 24th May, 2019, the Claimant’s law office was forced to answer scores of calls and messages due to the inaccuracy of the headline and article,” Poonai said in court papers filed.

His lawyers noted that the online article was removed the following day, but the printed (hard copy) version cannot be removed. The publication, he says, has caused severe harm to his reputation.

“As a result of the said headline and article and its dissemination, online and offline, by the Defendants, the Claimant’s personal and legal reputation and standing has been irreparably and severely damaged, lowered in the estimation of right-thinking members of society and the Claimant has suffered and continues to suffer financial injury, constant distress, humiliation, embarrassment, indignity, pain and suffering,” Poonai said through his lawyers in court papers seen by Demerara Waves Online News.

Poonai said he was Vishnu Rajendra “Joey” Poonai who was found guilty of the offences in Canada and subsequently disbarred in Canada. “This person has no professional relationship, close personal relationship or any association with the Claimant, his law practice or otherwise in Guyana or elsewhere and it is common knowledge or knowledge which can easily be obtained that the Claimant and Vishnu Rajendra “Joey” Poonai are two separate and distinct persons.”

The Senior Counsel suggested that Kaieteur News deliberately set out to harm him because of a single phone call to the claimant between 31st December, 2018 and 22nd May, 2019 before the article’s creation and publication by the defendants would have prevented this state of affairs in breach of accepted principles of good and fair reporting and the standards of journalism and news reporting.

“This clearly shows that there was malice, vindictiveness and a deliberate attempt by the Defendants to injure and harm the reputation and good standing of the Claimant and the President of the Co-Operative Republic of Guyana by suggesting that due diligence was not done in conferring silk on the Claimant,” he said.

He noted that on 24th May, 2019, the Defendants printed and published “an apology” titled “Wrong Poonai accused of fraud, Kaieteur News apologises unreservedly” acknowledging that an error was made but providing the excuse that “two men with the same name and both of them being lawyers and are almost the same age” led to the erroneous publication. “This is untrue. Further, no retraction was made.”

The defendants admitted that the publication was made without justification and stated that the electronic edition was removed.