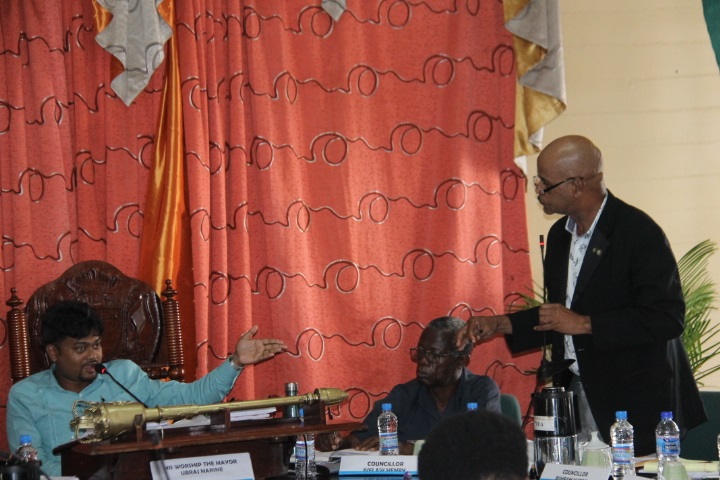 The Georgetown City Council on Wednesday agreed to cancel a contract for cleaning Bourda Market, after concerns were raised that the municipality could not afford to pay GYD$2 million per week, despite suggestions that negotiations continue for a lower fee.

None of the councillors voted against the call to cancel the contract with Dartmouth Skips Rental after Mayor Ubraj Narine asked City Treasurer, John Douglas to tell the council meeting whether the coffers could afford GYD$2 million weekly. “We cannot afford that amount per week and there is a lot of other things that we cannot afford,” Douglas said.

Deputy Mayor, Alfred Mentore backed Narine’s call, saying that Bourda Market generates just about GYD$300,000 per week in revenue. “It’s really a futile exercise for us to continue to be subsidising this particular market when the monies that are coming in can’t collide with the monies that are going out so we really need to look at this from a business perspective and a perspective that makes sense,” Mentore said.

Councillor Clayton Hinds failed to convince the mayor and other councillors for City Hall to secure a reduction of fees from Dartmouth Skips, in the same way reduced fees were successfully negotiated with Puran Brothers Waste Disposal Inc and Cevons Waste Management Inc. “If we take it upon ourselves without the actual experience of doing it, we are going to find ourselves in a logjam and I think that we should meet and try to discuss this thing further with these people and try to see what proposal they can come up with so that we can have a continuity…I’m talking about the cleaning contract at Bourda Market,” Hinds said.

Former Mayor, Patricia Chase-Green was not convinced that the deal with Dartmouth should be cancelled now until the report of the Solid Waste Committee is circulated to the wider council.

Councilor Trichia Richards of the Finance Committee added that a comparative analysis should be presented before “we even look at removing Dartmouth Skips”. After she noted that there was a “vast difference” in cleansing works at the avenue through the Le Repentir Cemetery by City Hall workers compared to those done by private contractors, Narine recommended that municipal workers be sent home “if you have value for money”. “If we got value for the people’s money in the City, send home the Council’s workers because we cannot continue to pay Council’s workers and when we are not getting the production of Council’s workers so therefore we send home them and we can contract the work,” the city mayor said.

Noting that GYD$101 million has so far been paid to Dartmouth Skips to clean Bourda Market, the Mayor instructed Town Clerk Sharon Harry to collect information from the Solid Waste, Engineers and Markets departments of the city administration about the number of cleansing workers in each. He also recommended that the departments communicate and coordinate their operations effectively. Mentore and fellow councillor Heston Bostwick added that the list should include the names of employees and departments to allow councillors to compare.

“All should come under Solid Waste. Deal with the waste in the City so…You see this hypocrisy that happened, I will not tolerate it as Mayor and I know that Council would not tolerate it and this two million dollar need to end,” Mayor Narine added.