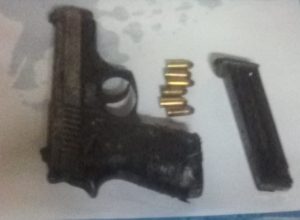 The gun and ammunition allegedly found in possession of the rape accused.

A 27-year old miner has been arrested for allegedly raping a child under 16 years old.

The miner of Potaro River was also detained in connection with alleged illegal possession of a firearm and ammunition.

Investigators said a “search of his person revealed an unlicensed pistol with six live rounds.”

The suspect, who was arrested at Garraway Stream, Potaro River, is cooperating with investigators, the Guyana Police Force (GPF) said.

Meanwhile, the GPF also reported that a woman at Vigilance, East Coast Demerara, was arrested for alleged illegal possession of marijuana.

Police said when they arrived to conduct a search, the 35-year old woman “quickly disposed of a parcel through one of the shop’s window.”

The suspect, who is the owner of the business, was promptly arrested and is being processed for a court appearance. The prohibited substance weighed 120 grammes.