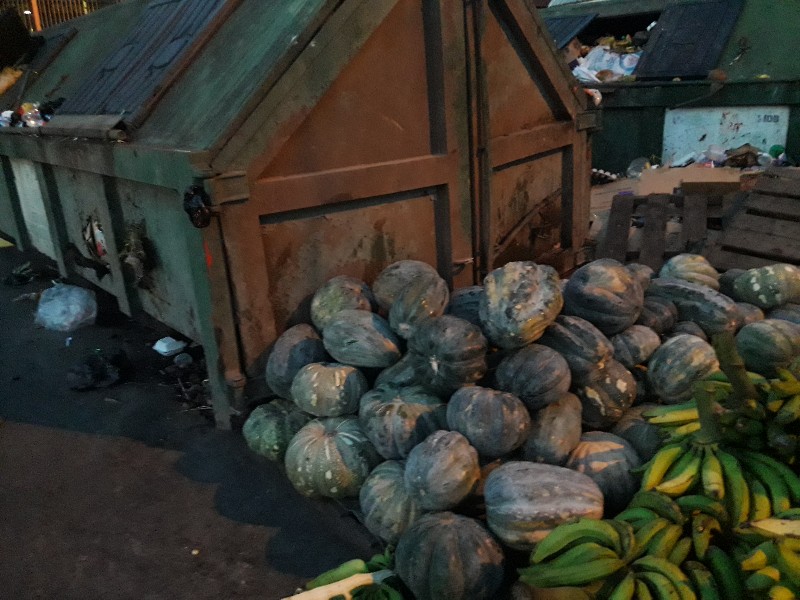 Pumpkins and plantains next to the garbage-filled dumpsters on Good Friday night outside of the south-western end of the Stabroek Market.

Even as the Georgetown City Council and the Private Sector Commission (PSC) grapple with the garbage disposal problem facing the commercial sector of the town, City Hall appears to be unmindful of vendors selling outside Stabroek Market alongside a foul-smelling garbage collection site which potentially threatens produce contamination and poses a health risk.

This situation had been brought to the attention of then City Mayor Patricia Chase-Green more than one year ago as she had been passing the same location just south-west of Stabroek Market.

However, the problem appears to have gotten worse. Vendors are now being allowed to sell vegetables on the ground, bracing against garbage-filled dumpsters as was witnessed by Demerara Waves Online News on Good Friday night.

City Constabulary personnel usually collect payments from vendors to sell in that area. City by-laws make it an offence for vendors to sell fruits and vegetables on the ground.

The seeming tolerance of allowing vendors to sit around that fetid area and moreso sell their produce in the dumping area comes at a time when the municipal government and the PSC are trying to find ways to deal with the disposal of commercial waste. 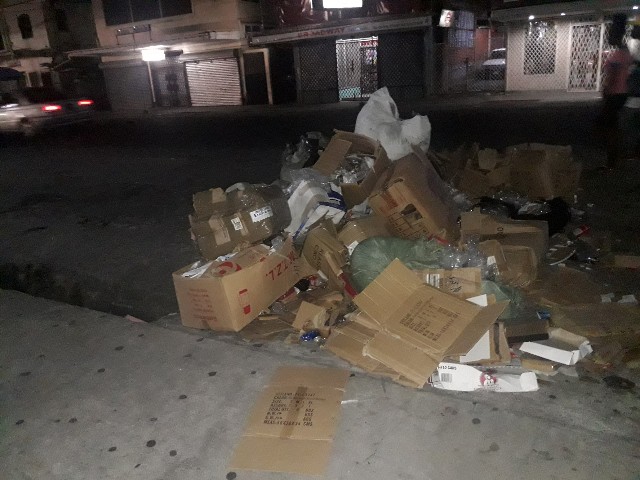 Last week, City Mayor Ubraj Narine and PSC Executive Member Gerry Gouveia led a team through the streets of commercial Georgetown to examine ways of dealing with garbage disposal by city businesses. “We agreed to walk the streets in terms of the garbage situation that we are facing so… we are out here. We see some of the challenges, both with the businesses and also M&CC.

“It’s nothing to fear, nothing to hide. We need this kind of cooperation and now we have the Private Sector Commission on board and we will be able to fasten things in a better way for the betterment of Georgetown,” Narine told Demerara Waves Online News. The Georgetown Chamber of Commerce, he added, is also expected to be part of the mission to ease the garbage problem.

On most nights, huge piles of garbage are left by businesses on Regent Street and Robb Street to await collection by disposal trucks. Timely collection, sources have previously said, depend on the availability of garbage trucks and other vehicles.

Gouveia said a meeting would soon be organised with Chinese business owners as one of the major hurdles to cross is the Mandarin language barrier between Chinese and Guyanese. “We had a problem communicating with them about their garbage strategy. For me, I have seen a lot of genuine business people putting their garbage out and really wanting the City to help them to remove their garbage and they are complaining the trucks are not coming regular enough and I think a lot of people don’t have a garbage strategy for their business so they’re just dumping their garbage aside the street and hoping the City will pick it up,” he said. 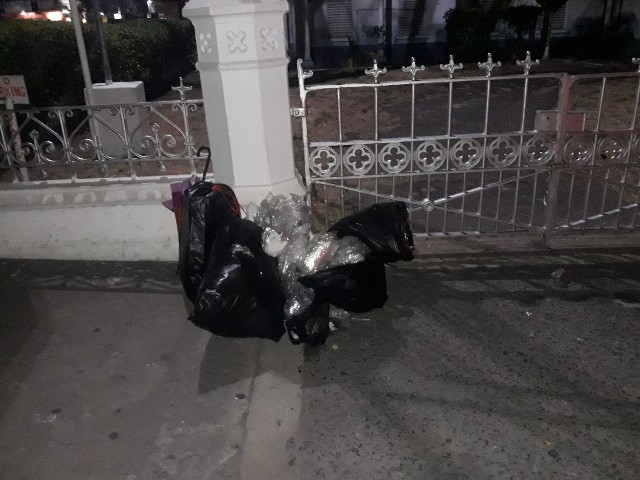 Someone decided to gift pile of garbage to City Hall outside its front gate seen here on April 17, 2019 at 9:19 pm.

Deputy Mayor, Alfred Mentore, who was also part of the joint tour of the business section of Georgetown, later told Demerara Waves Online News that the walkabout was not a public relations exercise. He said it was the business sector that proposed the joint visit “to let us see how these people are dumping indiscriminately and how we could manage”.

Mentore believed that having a garbage plan should be a condition for granting licences to businesses similar to required compliance by the Guyana Revenue Authority (GRA) and the National Insurance Scheme (NIS). “Those are things we are going to be looking at strategically to get a buy-in,” he said.’

Told that City Hall should share some of the blame for tardy garbage collection, the Deputy Mayor said the Solid Waste Department was no longer depending on private waste collection-disposal companies, but was using its own tractors and skip-bins. “We are going to be delivering on our end, but we also have tractors picking up skip-bins,” he said.

For several years now, City Hall had been periodically owing Purans and Cevon’s garbage collection services millions of dollars resulting in, a number of occasions, the suspension of their services in protest.