Police question Jagdeo about “chase them out” call 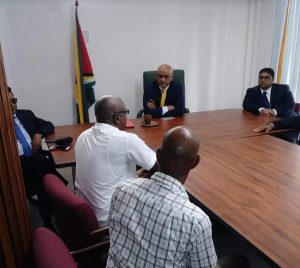 Opposition Leader Bharrat Jagdeo being questioned by police officers (backing camera) in the presence of Attorneys-at-law Anil Nandlall, Sanjeev Datadin and Priya Manickchand (not in photo).

Police Wednesday morning sought to question Opposition Leader Bharrat Jagdeo about allegedly inciting supporters at a recent campaign rally to “chase” out the President and other ministers if they entered communities after March 21 when national elections, prompted by a no-confidence motion, were due to be held.

However, Jagdeo declined to respond orally to questions by Former Deputy Crime Chief Hugh Jessamy and, instead, took up the officer’s offer to submit a written statement.

“I’m (at)tempted to give you an explanation because I do believe there is strong justification for the things that I said,” Jagdeo was seen telling Jessamy at his Church Street office.

The Guyana Police Force, which earlier this week denied taking political instructions to arrest Jagdeo, was mum on confirming that the Opposition Leader was questioned.

Jagdeo, on March 10, had urged People’s Progressive Party (PPP) faithful at the village of Babu John in Berbice to chase out President David Granger, Prime Minister Nagamootoo, Vice President Sydney Allicock and other government ministers from communities after March 21.

Jagdeo had contended that the administration would have been illegal because elections had not been held by then following the National Assembly’s passage of an opposition-sponsored no-confidence motion on December 21, 2018.

The Caribbean Court of Justice will soon determine if the Guyana Court of Appeal’s decision that the no-confidence vote was invalid because it was not passed by an absolute majority of 34 votes.

Jagdeo stressed to Jessamy and another police officer that he could justify his comments at the birth anniversary ceremony of the PPP founding leader Cheddi Jagan at Babu John.

“Had it not been a legal matter, I would have justified every single word that I uttered there at Babu Jaan,” he said.

PPP presidential candidate, Irfaan Ali asked Jessamy whether police had questioned Minister Volda Lawrence about her controversial remarks concerning her preference to employ supporters of her People’s National Congress Reform of which she is Chairman.

However, Jessamy declined to respond to Ali’s question.

The Ministry of the Presidency on Tuesday also denied instructing police to arrest Jagdeo for his remarks at Babu John.