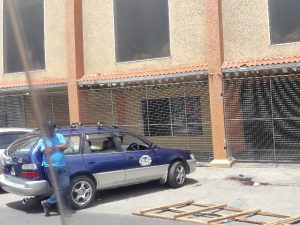 The blood-stained pavement outside Ashmin’s Store where the money changer was shot.

Police said at about 10:35 Alleyne was shot and robbed by two men on a motorcycle both dressed in Muslim garb and armed with a handgun each.

Alleyne was escorted to the Georgetown Public Hospital Corporation where he was seen and examined by a doctor on duty.

However, he succumbed while receiving treatment about 11:40 am, police said.

Enquiries disclosed that the Victim left his home about 10:00hrs on 16th April, 2019 with his motor car PMM 9512, his licensed pistol and an undisclosed sum of cash to ply his trade on Water Street.

“He parked and secured his motor car on the eastern parapet of High in front of Ashmin’s Mall and immediately after was confronted by two males ; a scuffle ensued between him and the suspects and in the process the victim received gunshot injures to his head and was relieved of the cash and firearm,” police said.

The suspects reportedly escaped on a motor cycle . No one has been arrested, police said.