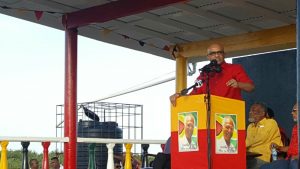 Even as the People’s Progressive Party Civic (PPPC) and its three Guyana Elections Commissioners (GECOM) continue to object to house-to-house registration on the basis that it is not a legal requirement, PPPC supporters would be overseeing the process when it begins, a top party official said.

General Secretary, Bharrat Jagdeo has said his party would take steps to ensure the integrity of the registration process.

“Yes, yes definitely. We are a party that has very good grassroots support all across the country and so we will be looking out for the interest of Guyana to ensure that we have the process done properly but that is only if necessary,” he said.

Earlier, Jagdeo told a press conference that the PPP would be “vigilant” to guard against any effort not to register persons in his party’s strongholds or register persons who ought not to be on the voters’ list.

The Opposition Leader also said if the Caribbean Court of Justice rules that the no-confidence motion was validly passed it means that general elections would have to be held before house-to-house registration.

The PPP and its three elections commissioners have repeatedly rejected having house-to-house registration on the basis that the existing voters’ list, which expires on April 30, 2019, is valid and was used without major complaints at last year November’s Local Government Elections.

However, the governing coalition, including President David Granger and its three elections commissioners, have called the list bloated mainly with the names of overseas-based Guyanese. The PPP has since deemed house-to-house registration as having no legal basis and it would result in the disenfranchisement of thousands of overseas-based Guyanese who would like to return home to vote.