Private sector, Granger at odds over impact of political uncertainty on businesses 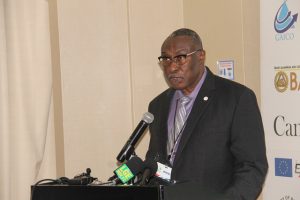 Guyana’s private sector and President David Granger on Wednesday disagreed over the impact of the unsettled no-confidence motion on the business environment.

“I do not know how valid that perception is but, as far as I’m concerned, the government has done nothing to engender any disorder or any despair in the business community so I don’t want to say whether that’s a valid perception or not,” the President said.

The umbrella Private Sector Commission (PSC) and its affiliates – Georgetown Chamber of Commerce and Industry (GCCI) and the Central Corentyne Chamber of Commerce (CCCC) – hoped that the Caribbean Court of Justice (CCJ) could swiftly hand down its decision on the validity of the no-confidence motion.

“The PSC had discussions with local and international businesses who have expressed reservations in investing as the uncertainty continues. There has been a reduction in Government and private sector contracts directly attributable to the uncertainty,” the PSC said.

However the President differed with the business community, putting down their concerns to a matter of “perception”. “I think it’s a misperception. There is no chaos or confusion or crisis in the political situation. Everything that has happened since the 21st of December (when the no-confidence motion was passed) has been logical and, on the part of the government, it has been within the framework of the law,” he said.

Calling the business community’s position “rather unfortunate”, the Guyanese leader said he was ready to meet with the private sector once he is in Guyana after his return from a medical trip to Cuba.

The President said both the government and the Opposition enjoyed the right to seek redress right up to the Trinidad-headquartered CCJ.

United Kingdom High Commissioner to Guyana Greg Quinn also recently expressed similar concerns about the adverse impact the political environment could have on the business climate.

The PSC also called for an “expeditious resolution of this political situation”, saying it would bring great relief to the business community. “The Commission calls on the Caribbean Court of Justice to provide a prompt resolution to this matter so that both local and international organizations and businesses would again see Guyana as a country with boundless opportunities,” the business organisation said.

Restating its concerns earlier this week, the city’s Chamber of Commerce added its voice for the regional court to hear the appeal urgently. “The Chamber is of the fervent hope that the matter of contention in the political arena, which is now before the Caribbean Court of Justice, will be expeditiously resolved. This resolution will bring an end to the degree of political uncertainty and ensure that a favourable business environment prevails,” the GCCI said.

“Whilst on the surface the ruling of the appeals Court seems to have calmed the nation somewhat, this matter should be most urgently brought to a closure so that our country can move forward. In this regard we are calling on the Caribbean Court of Justice to urgently schedule hearings to speedily bring this issue to a finality,” the Corentyne Chamber added.

In an apparent reference to the Guyana Court of Appeal’s ruling that invalidated the no-confidence motion on the ground that it was not passed with an absolute majority of 34 votes, the Corentyne Chamber of Commerce said the decision did not make sense. “Whilst we also note the illogicality of the decision of the Appeals Court, we urge it to be respected,” that Berbice-based body said.

The Corentyne Chamber also called on the Guyana government not to respect the ruling in a piecemeal manner and take steps to remove from the House its four Members of Parliament (MPs) holding dual citizenship – Carl Greenidge, Joseph Harmon, Rupert Roopnaraine and Dominic Gaskin.

“The same way the government is welcoming this ruling, we are urging that they also respect the ruling that dual citizens should not be sitting in our parliament and do something about it in the next sitting. It should not be business as usual in this regard,” that Chamber said.

The opposition People’s Progressive Party, which has opted to boycott parliamentary sittings until the CCJ hands down its decision, has three known dual citizenship MPs – Gail Teixeira, Adrian Annamayah and Odinga Lumumba.

The CCJ has set aside Friday to fix a number of timelines for submissions, oral arguments and decisions.

Previous: 6-year-old pupil killed in road accident
Next: OPINION: The arrogance and hubris of Bharrat Jagdeo are not working for the PPP