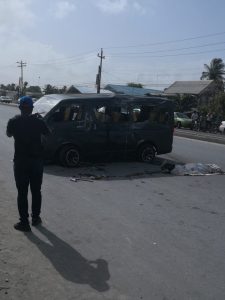 Police said there was no trace of alcohol on the driver’s breath. However, he has been held pending a probe. The bus licence number is BTT 4910 and it was being driven by a 47-year old man who lives at Golden Grove, East Coast Demerara.

Police were told that the minibus was speeding west along the southern drive lane of the southern carriageway of the Success Public Road at about 7:30 am.

“It was alleged by the driver that a motor car, blue in colour number unknown, over took him from the left side and collided to his left rear wheel causing him to loose control and collided into the medium,” the Guyana Police Force said.

Police added that Cully was flung out of the bus and ended up on the northern carriageway and the minibus then turned onto its left side and landed on her and started skidding for some distance before it came to a halt. The vehicle was turned over and the lifeless body of Cully was removed.

The Guyana Police Force said the other passengers were then assisted out of the vehicle by public-spirited citizens and taken to the Georgetown Public Hospital.

Beaton was taken to the Woodlands Hospital where he was being prepared to undergo surgery having reportedly lost several fingers.

Those taken to the Georgetown Public Hospital were seen and examined by a doctor on duty and Ellis died whilst receiving treatment. Police added that the other passengers who were all conscious and suffering from lacerations about their bodies were awaiting treatment.