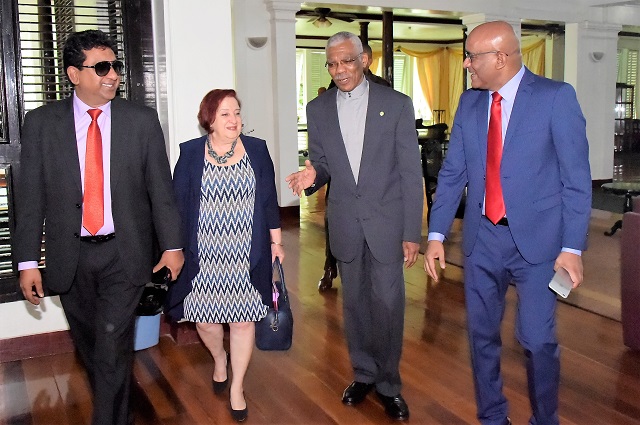 President David Granger has invited Opposition Leader, Bharrat Jagdeo to meet with him next week Wednesday to possibly explore extending the deadline by which general elections should be held and also funding for the polls.

Neither Jagdeo nor Opposition Chief Whip, Gail Teixeira could be reached to ascertain whether Jagdeo would back down from his so far known reluctance to meet with the President.

In a letter dated February 25, 2019, Minister of State Joseph Harmon invited the Opposition Leader to meet with the President on March 6, 2019 at 11 am at the Ministry of the President.

Down on the proposed agenda are the National Assembly’s constitutional role in the current situation, and the Guyana Elections Commission’s (GECOM) readiness and requirements for poll funding to enable it to conduct general and regional elections.

The Minister of State informed the Opposition Leader that the President has already written to the Chairman of GECOM, James Patterson telling him that the seven-member elections management authority should get ready to conduct the elections.

“The President wishes to advise that he has written to the Chairman of GECOM urging him to initiate arrangements for the conduct of general and regional elections and committing to support his request for financing those elections,” Harmon told Jagdeo.

Unofficial estimates are that GECOM needs about GYD$2.2 billion to finance the conduct of the polls that should have been held by March 19 or 20, 2019 following the National Assembly’s approval of the no-confidence motion on December 21, 2018.

However, the GECOM Secretariat had said it did not receive the green-light from the commissioners to begin preparations for the polls, claims and objections or house-to-house registration.

Eventually, a controversial vote among the commissioners saw them by majority deciding that GECOM should continue its routine work for 2019, inform the President that money was needed for the elections and that no election could be held in March.

The Guyana Constitution provides for the 90-day deadline to be extended by a two-thirds’ vote of the National Assembly.

Jagdeo has so far refused to lend his People’s Progressive Party’s support for extending the deadline because he said his party and commissioners were not to be blamed, but that the responsibility should be borne by a section of the commission and the governing coalition in the Granger administration’s quest to hold on to power.

But the governing coalition and its commissioners have been demanding house-to-house registration to remove the names of deceased, migrants and also those who have changed their places of residence in Guyana.

The last house-to-house registration was conducted more than seven years ago.