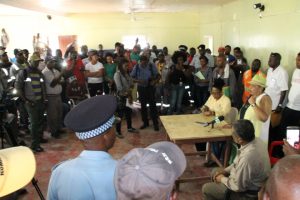 Senior Minister of Labour, Amna Ally said government expected that RUSAL-BCGI would reinstate the 61 workers who were dismissed last week Monday because they went on strike for higher pay, fringe benefits and better working conditions.

In a meeting with branch representatives of the Guyana Bauxite and General Workers Union (GB&GWU) at Maple Town, Aroaima, Ally said the company could no longer refuse to recognize the union.

On the issue of the reinstatement of the workers, she said she was expecting confirmation from RUSAL-BCGI on Friday.

“What is crucial is for us to get the workers back on the job” Ally said.

On the issue of the proposed terms of resumption such as no break in service, no loss in pay, arbitration and continued recognition of the trade union, Ally said that is a statutory matter and so the proposal would have to be reviewed and hopefully upheld.

She said government made it very clear to senior RUSAL officials that there was a legitimate poll that the GB&GWU won recognition and so that bargaining agent must be respected by the company.

“They have to speak with the union because the union represents the workers,” Ally said.

The Minister of Social Protection vowed that RUSAL-BCGI would not be given a free pass and “we ain’t going to sell out our workers”.

“We have been very clear what we want from them and I don’t believe they have an alternative,” she said.

She advised the workers to “stay put” and “nobody can’t move you out of here”, while the RUSAL-BCGI officials speak with their principals and inform government.

Ally, a veteran politician, urged one of the union representatives not to “chase” the Russians out. “Let us don’t go to the stage of removing anybody. Let us look at first resolving the issue and then we look at the other options,” she said.

The Minister said a government ministerial delegation has already told RUSAL-BCGI that they could no longer refuse to recognise the GB&GWU and there was no room for that issue to be raised again. “We have made it very clear to them that he union must be duly recognized. I don’t care whether they don’t like any of the personalities in the union. That is their problem,” she said.

Ally said foreign companies would not be allowed to come to Guyana and violate workers rights. “We are going to pursue this. We are not going to allow companies to come and treat workers anyway they want to be treated,” she said.