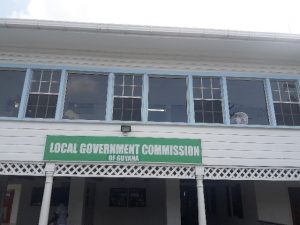 The 27 workers of Guyana’s Local Government Commission (LGC) and its commissioners would be paid their outstanding salaries, Commission Chairman Mortimer Mingo said.

“The matter has been resolved,” he told Demerara Waves Online News without going into details immediately.

Sources said the outstanding salaries and other emoluments for January and February 2019 would be paid “immediately”.

According to the sources, the decision was made when Mingo and the Finance Secretary of the Ministry of Finance Michael Joseph met Friday afternoon.

Earlier in the day, LGC staff failed in their bid to raise their concerns with President David Granger and Prime Minister Moses Nagamootoo.

Last week, the LGC announced that it was “virtually shut down” because the Permanent Secretary of the Ministry of Communities, Emil McGarrell had been refusing to countersign cheques for not only salaries but other services and supplies.

However, McGarrell has explained that the LGC is still a budget agency under the Ministry of Communities and so he could not countersign cheques because there is a shortfall in amounts for October, November and December 2019.

Demerara Waves Online News has been told that the shortfall is for mainly salaries totalling GYD$27 million.

The Permanent Secretary has said countersigning in light of the shortfall would result in a breach of the Fiscal Management and Accountability Act.