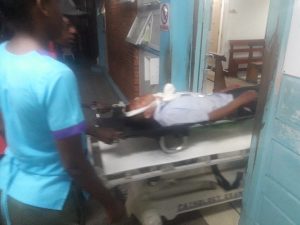 Pilot Gomez being wheeled into the Accident and Emergency Department of the Georgetown Public Hospital.

A Guyanese policeman and the pilot of the single-engine Cessna plane that crashed Monday night were rescued several hours later and rushed to hospital, officials said.

After an almost five-hour operation that included the Guyana Defence Force Air Corps and ground troops, Captain Lincoln Gomez and policeman Michael Grimmond were taken to the army helicopter and flown to Georgetown.

Captain Gomez was rushed by GDF ambulance from Camp Ayanganna to the Georgetown Public Hospital. His jaw was bandaged, confirmation that he sustained a fractured jaw. He was placed on a stretcher delicately and wheeled into the Emergency Department at about 12:18 Tuesday morning.

Grimmond was taken by the army’s ambulance to the privately-owned St. Joseph’s Mercy Hospital.

The corpse of an American missionary, who died while climbing a mountain, was left at the crash site.

The GCAA official said the plane was flying out the body from the interior location, Arau, to the Eugene F. Correia ‘Ogle’ International Airport when the mishap occurred about 14 miles from its destination.

The plane went down at about 7 o’clock Monday night but it was not until about 11:57 pm that the victims were lifted off aboard the GDF helicopter.

The rescue team travelled to the crash site by air, boat and foot.

The plane bearing US registration markings, N8 704T, is operated by the Seventh Day Adventist Church to provide emergency medical evacuation services mainly from the interior.