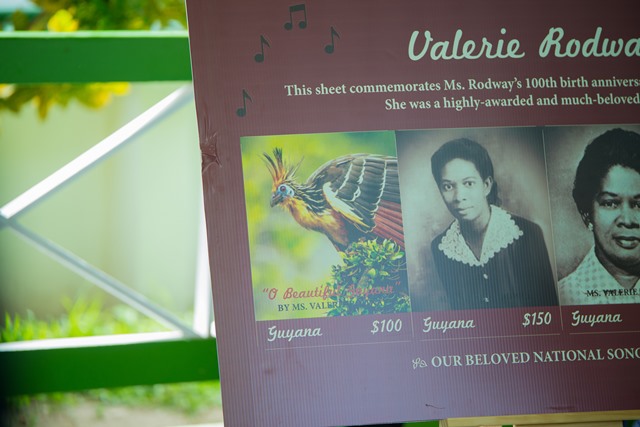 The building located at Lot 94 Carmichael Street, Cummingsburg, Georgetown was renamed the Valerie Rodway House in honour of Rodway’s work as a musician and her contribution to Guyana. The building houses the Ministry of the Presidency’s Public Information and Press Service (PIPS) Unit and the National Trust of Guyana. A commemorative stamp, issued by the Guyana Post Office Corporation was also unveiled at the ceremony which was held in front of the building.

“Valerie Rodway’s talent was that she moved beyond ethnicity, beyond religion, beyond the prejudices of being urban or rural and she helped us to discover our ‘Guyaneseness’. When you read what she wrote and listen to what was played… there is no prejudice… this is all about Guyana, all about us,” the Head of State said. 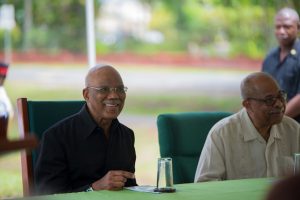 In this vein, the President said the Valerie Rodway House serves as more than an edifice but as an education facility for Guyanese and he reiterated his call for closer attention to be paid not only to Ms. Rodway’s repertoire of Guyanese music, but that of other local musicians as well.

President Granger noted that it was once a struggle to build what is now recognised as the Guyanese nation and as such the cultural movement, which fostered and promoted art, music, drama and writing, and which ultimately led to Guyana’s diversity must never be forgotten or ignored.

Professor at the Scripps College of Communication at Ohio University and author of “Valerie Rodway – A National Treasure”, Dr. Vibart Cambridge shared similar sentiments and expressed gratitude to the President for recognising the importance of Guyanese music and culture.

Dr. Cambridge said music has been and remains crucial to engendering a sense of belonging. “It connects us to family, community and nation… National songs are symbols of nationhood and help to foster a distinct national consciousness. They are an invariable part of our patrimony; they define us, remind us of our common experiences as a nation, reinforce our pride by depicting our country favourably, reaffirming our shared values and aspirations,” he asserted.

Dr. Cambridge described Mrs. Rodway as “Guyana’s greatest composer of national and patriotic music” and noted that she has left behind a substantial body of work that represents various styles and reflects national pride and commitment. “Valerie Rodway’s work demonstrates the ability to transcend race and ethnicity to foster social cohesiveness,” he said, even as he called on the National Trust of Guyana to do more to preserve Guyanese music.

Dr. Fraser then presented the document to Archivist at the Walter Rodney Archives of Guyana, Mrs. Nadia Gamel-Carter, where it will be stored.

Mrs. Rodway was born in New Amsterdam, East Berbice-Corentyne (Region 6) on February 12, 1919 and is best known for her composition of national songs including “Hymn for Guyana’s Children”, written by Vere T. Daly and “Arise, Guyana”, written by J. W. Chinapen. Mrs. Rodway and her husband James wrote “Guyana, the Free”, which she submitted for the national anthem competition. Mrs. Rodway composed patriotic music, music for schools, test pieces for music festivals, music for community signing and art music. She also set music to the poems from some of Guyana’s famous poets such as Martin Carter, C.E.J. Ramcharitar-Lalla, A.J. Seymour, and Nellie Wishart. Valerie Rodway died in 1970.