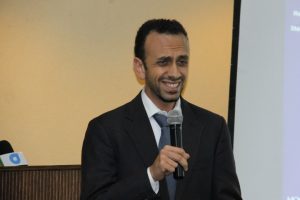 Rached Maleej of the UK company, BDO LLP, hired as the independent administrator for Guyana’s EITI.

As Guyana prepares its first Extractive Industries Transparency Initiative (EITI) report on monies spent by 35 petroleum and mining companies and received by government, a UK-based firm that has been hired to match earnings and expenses says the companies will be asked to authorise the Guyana Revenue Authority (GRA) to release confidential tax information.

Hired independent administrator for Guyana’s EITI Rached Maleej of the public accounting, tax, consulting and business advisory firm, Binder Dijker Otte (BDO), was speaking at the opening of a special workshop, “The EITI Reporting Mechanism, Methodology and Process”, held at the Cara Lodge in the capital Georgetown.

The country is at the stage of preparing the groundwork to collect data from several government agencies: the GRA, the Guyana Geology and Mines Commission (GGMC), the Guyana Gold Board, the Ministry of Finance, the National Insurance Scheme and the Environmental Protection Agency, as well as nine oil and gas, and 25 mining companies. The data would be used to compile Guyana’s first EITI report by April 25, 2019.

Maleej said one of the “legal obstacles” faced is confidentiality because the GRA would be unable to release taxpayer information to third parties to compile and consolidate revenues and expenditures from private sector entities unless it is authorised by an entity or the President. Like in the UK and other countries, he said government could ask the local companies to grant waivers for the GRA to release their tax information and identities.

“For the major players, we can obtain a waiver. We can try to contact them and try to get a no-objection signature. For the others, what can happen is that the independent administrator himself sign a confidentiality agreement and he will be working on the information and presenting the report and this should be approved by the MSG [multi-stakeholder group],” Maleej said. He said the information could be presented without a “name and shame” approach without breaking Guyana’s laws. 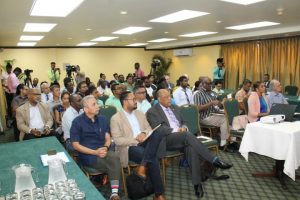 Attendees at the opening of the special workshop for “The EITI Reporting Mechanism, Methodology and Process”.

GGMC Commissioner Newell Dennison said his entity could provide some information to protect public disclosure of sensitive economic and trade interests except for the 34 major players that have been singled out for reconciliation.

Maleej said BDO would need a comprehensive list of all the valid and active players in Guyana since 2017 from the GGMC, the highest and specialised authority in the oil and gas sector. “This is the crucial information. This is the cornerstone of the entire EITI standard because if we do not have it, we have no assurance on the comprehensiveness,” he said.

After the EITI’s Independent Administrator obtains the list from the GGMC, the BDO official said it would be handed to GRA to provide the information without disclosing the names.

Maleej explained that the six-phase process would include an analysis of the major private sector players in the oil and gas sector. “We will be asking them how much do you receive and how much do you pay to reconcile or identify the discrepancies,” the BDO official added. Those figures, he said, would include all of the taxes and payment flows to government.

The process requires the private and public sector entities to complete templates by a deadline after which no more information would be accepted or “it will be disturbing all of the tables”. “It is very important that all of the information in the EITI report match each other,” Maleej added.

Meanwhile, the BDO official urged government not to rush to add the fisheries and forestry sectors to the EITI process because of the need for the related agencies to be restructured in line with the Initiative’s standards. “Usually feasibility studies are conducted to include or exclude an entity, the study comes up with a whole set of recommendations to address legal and technical obstacles,” he said.

Minister of Natural Resources and Guyana’s EITI Champion, Raphael Trotman remarked that Guyana at one time had considered whether to be part of the Open Government Partnership or EITI or both. “In the end, we determined that our best way forward was with the EITI and we have not regretted it,” he said.

National Coordinator of the Guyana EITI process, Dr. Rudy Jadoopat appealed to all relevant government agencies and the private sector to provide information to assist in Guyana in preparing its report.

Guyana became a member of the Norway-headquartered EITI process in October 2017.