AFC, PPP shrug off claims of State resources being used for political activism 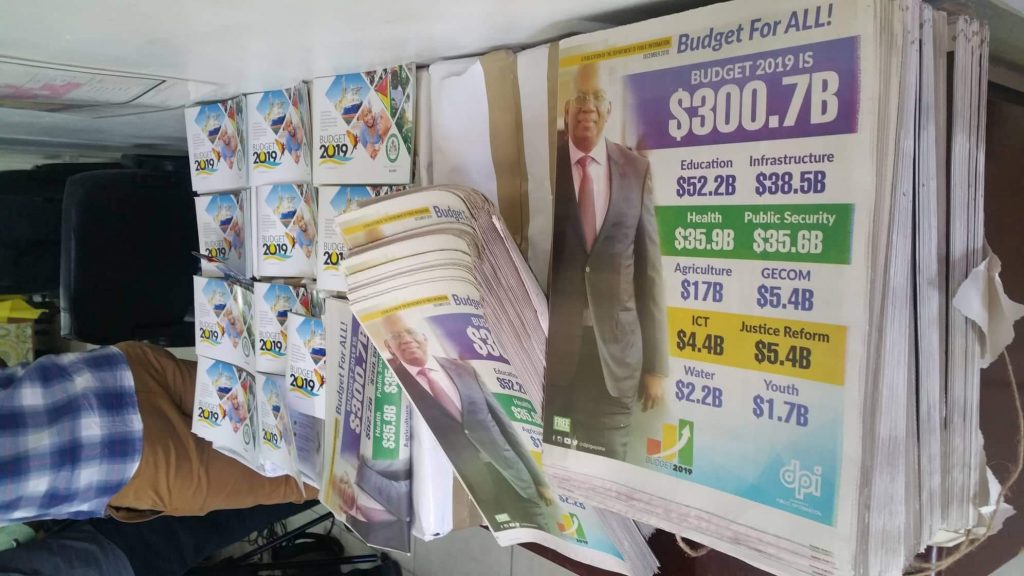 Publications of the Department of Public Information at the Alliance For Change (AFC) headquarters. Some of them were in sealed packets.

As Guyana’s elections campaign slowly heats up, the use of State resources is again taking centre stage after the governing coalition and the opposition People’s Progressive Party (PPP) were seen using materials funded by the public purse.

The Alliance For Change (AFC), the coalition partner, and the PPP on Wednesday defended their decisions to do so.

Last week Saturday, AFC and A Partnership for National Unity (APNU) ministers, clad in their party colours and branded clothing, fanned out in several areas of the town of Linden meeting residents and delivering publications produced by the government’s Department of Public Information (DPI) as they sought to convince residents that government has been doing its best to improve their quality of life over the past three years. The multi-ministerial outreach was covered exclusively by DPI. The media were not invited to cover that outreach.

AFC General Secretary, Marlon Williams struggled to state what safeguards were there to prevent the use of State resources for campaign purposes. “The budget has allocated a number of monies for specific functions and those requirements will be adhered to,” he said, adding that no State resources were used for the November 12, 2018 local government elections.

Secretary of the AFC’s Youth For Change Kevin Valladares added that APNU and AFC have not used state resources at the 2016 and 2018 local government election campaigns.

Women For Change (WFC) representative Cynthia Rutherford defended the ministers’ distribution of DPI material to Guyanese. “If you would notice that those newspapers published by DPI contain governmental works. It does not contain party works. As to distribution, it may sound harsh, but I see no harm if persons of the party distribute the work published by DPI whose contents are filled with the work of the government. It’s work of the government. People are entitled to know of it so if party people distribute it… [sic] were that information published by DPI, was party information, then there would be issues of State resources but that was not the case,” she said.

Stacks of the DPI publications were seen at the AFC headquarters on Wednesday.

On Tuesday, hundreds of persons mobilised by the PPP were transported by several buses and other vehicles to the State-owned Red House which has been leased to the Cheddi Jagan Research Centre, an organisation that’s strongly affiliated to the opposition party. The lease is the subject of a High Court dispute after the coalition government sought to evict the Centre from Red House.

PPP Executive Member and Attorney-at-Law, Anil Nandlall agreed that Red House is a “state asset” which has been leased to the Cheddi Jagan Research Centre. The High Court is yet to hand down a decision on the legality of the lease and, according to Nandlall, the Centre was free to accommodate anyone, including the PPP and its supporters to use the premises. “That is a matter for the legal occupant of the premises,” he said. “It is an asset of the State. No one has ever disputed that. No one has ever disputed the ownership of Red House. It is the possession of Red House that is disputed in Court,” he told Demerara Waves Online News. 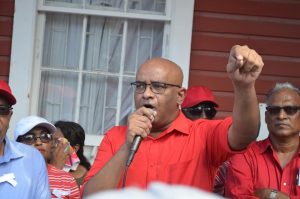 Bharrat Jagdeo in Red House compound addressing PPP supporters who had been mobilised at that venue to protest the decision by President David Granger and his Cabinet not to resign following the passage of the no-confidence motion. A High Court decision has since been appealed by government.

Asked whether the property should be used for political purposes or campaigning, Nandlall said Tuesday’s event, including an address to the gathering by PPP General Secretary and Opposition Leader, Bharrat Jagdeo was one at which the constitutionality of the no-confidence motion and the need to hold elections by March 19 was “canvassed”. “All State assets should be used to ensure that the constitution is obeyed. All resources of the State should be activated in a combined effort to get the constitution of the country obeyed at all times,” he said.

While in government, the People’s National Congress Reform as well as its affiliates under the APNU banner, and the AFC had stridently condemned the PPP for misuse of State resources such as the State media and information arms. While the PPP had been a minority government between 2011 and 2015, the combined APNU and AFC opposition had been peeved that they had voted against budgetary allocations to the then Government Information Agency (GINA) and the National Communications Network (NCN).

Over the years, Guyana’s political parties appeared to have given mere lip service to idea of campaign finance legislation. Several international elections observer missions have repeatedly recommended that such laws be enacted to avoid abuse by incumbents and prevent dirty money from seeping into electioneering.