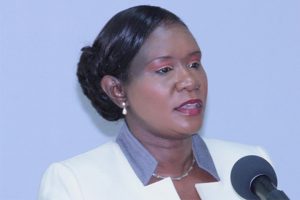 Former government minister in the People’s Progressive Party/Civic (PPP/C) administration, Jennifer Webster, who sold all her properties and moved out her cash to Canada, has lost her bid to retain her Canadian residency.

Records show that after she obtained the status in 2009, she resided in that North American country for a mere 148 days over a six-year period.

In her quest to convince Canada’s Immigration and Refugee Board that she should retain her residency status, Webster told a Tribunal that she transferred all of her wealth to Canada. “She invested most of the funds from the sale of her Guyana properties in the purchase of an expensive home. Unfortunately the builder of the home received the funds and did not complete the building. The matter is now being litigated. The appellant also testified she moved her personal belongings to Canada, purchased a motor vehicle and transferred her funds to Canada. She testified she has no further assets in Guyana,” the decision stated.

Canada’s Immigration and Refugee Board in July 2018 ordered Webster’s removal for breach of her residency obligations. A Tribunal found that Webster failed to prove that she had been away from Canada for at least 730 days in the five‑year period immediately before November 2014 due to humanitarian and compassionate reasons.

The Board found that although Webster landed in Canada in October 2009 she made career choices to be away by serving as Junior Finance Minister from 2006 to 2011 and again as Minister of Social Services from 2011 to 2015 when the PPP lost power. Webster sought to justify her second ministerial stint by saying that she grasped the opportunity Guyana had to have a seat at the UN Commission on the Status of Women to advance the cause of women and girls internationally.

However, Webster failed to convince the Tribunal lone member, Roxane Vachon about her decision to remain outside Canada for most of the first six years after obtaining her permanent resident status.

“I also note the appellant did not return to Canada at the earliest opportunity. Instead of returning after her first mandate she chose to seek re-election. There is no evidence the appellant even attempted to find work in Canada between 2009 and 2015. She chose to maintain her position as a minister for two mandates. I do not find the reasons given for the appellant’s absence mitigate her absence,” said Vachon in her ruling. Vachon questioned Webster whether her decision to remain in Guyana was influenced by the fact that she would have a life pension after seven years.

The Tribunal was also not satisfied that Webster was required to remain in Canada to look after her then 82-year-old mother, and her 33-year-old daughter who she said was suffering from depression and insomnia due to her prolonged absence from Canada since 2004 and always being worried about the safety of her mother. Also, the tribunal found that there was no medical information on file suggesting Webster’s daughter would suffer some mental health prejudice if the appeal is dismissed. Webster, according to the Tribunal, failed to produce evidence that she had been searching for a job.

She likely will suffer from the loss of the care and companionship of her daughter but she will continue to live with her granddaughter and has two other children in Canada. There is insufficient evidence to conclude she would suffer undue hardship,” said Vachon.

The Tribunal also frowned on Webster’s contention that at 57 years old, she could not be sponsored by her mother, siblings or child and so achieving residency status once again would be impossible and even a super visa would not allow her to put down roots in Canada.

“The appellant is highly educated and qualified and she is familiar with life in Guyana. She chose to remain in Guyana up to 2015 and she thrived in her country. The fact her immigration will be complicated by the fact she waited until nearing retirement to immigrate to Canada is simply the consequence of the appellant’s decisions.

The loss of the benefits of being a permanent resident of Canada is not undue hardship. Especially not when it is directly linked to the appellant’s freely taken decisions and choices. The hardship the appellant, her daughter and her mother will experience does not rise to undue hardship. This is a negative factor,” Vachon stated.