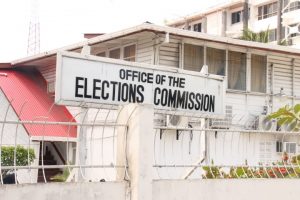 The Guyana Elections Commission’s (GECOM) technical experts have advised the seven-member commissioners that the earliest general elections could be held is July 2019, with the other option being in another four to six months after house-to-house registration is completed.

Chief Elections Officer, Keith Lowenfield told reporters Monday that he presented copies of the work-plans to members of the Operations Sub-Committee. The committee members are expected to read them overnight and prepare for a meeting Tuesday morning before heading into another with the full Commission in the afternoon.

Asked if the current voters’ list was good to run off a general election now, Lowenfield said “the list is clean; it has a life until the 30th of April” and “depending if the Commission so decides”.

The Guyana Government has allocated GYD$3 billion to GECOM to conduct house-to-house registration this year and replace the currently bloated list of about 500,000 names out of an estimated population of 750,000 persons.

Government-nominated elections commissioner, Desmond Trotman told Demerara Waves Online News that he would not be flinching from his position that elections must not be held unless there are fresh house-to-house registration and filling of vacancies. “I’m not going to support it,” Trotman said.

The opposition People’s Progressive Party (PPP) on Monday maintained that all they are interested in is the holding of the general elections by March 19, 2019 with the existing voters’ list which is valid until April 30, 2019.

PPP elections commissioner, Robeson Benn told reporters that based on an initial reading of the documents, he has seen another timeline that elections could be held by July 2019 or at another date several months after house-to-house registration is conducted. “There is a timeline which suggests July – I think it’s called earliest possible date- and then there are other deadlines which I didn’t go on to which suggest house-to-house registration and all kinds of things for six months or more,” he told Demerara Waves Online News.

Noting that as much as 90 days have been proposed for civic and voter education and training, Benn charged that there is a “callous enterprise” whose sole aim is not to hold the elections within the 90-day deadline after the National Assembly approved the no-confidence motion on December 21, 2018. “In my view, there is no other consideration that one could arrive at but that GECOM itself at the level of the secretariat is complicit in this problem. Either they have to be taking instructions out of fear or complicity, deliberately so, or they in themselves do not want to see these activities unfold as constitutionally mandated,” he said.

Benn reiterated that some of the activities could be compressed to achieve the March 19 deadline especially since staff had been trained for the November 12, 2018 Local Government Elections. He noted that holding of local elections is less complicated than general elections.

Without specifically referring to the current situation, the Chief Elections Officer said the duration of house-to-house registration would depend on the number of sub-offices and training of competent staff for a four-month exercise.

The Chief Elections Officer disputed claims by the PPP that the Secretariat was complicit in delaying the work. He said it is the Commission that gives direction to the technical and administrative arm of the elections management authority.