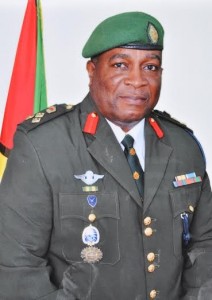 Former Chief of Staff of the Guyana Defence Force (GDF), Retired Brigadier Mark Phillips on Sunday suggested he is “available” to enter the political arena.

When asked whether he has been approached to become the prime ministerial candidate for the opposition People’s Progressive Party (PPP), Phillips insisted that he would not be responding to “rumours”.

Pressed on whether he would be open to serve in the political arena, Phillips would only say “I’m always available to serve the people of Guyana in any capacity”.

Brigadier Mark Phillips graduated from the Royal Military Academy, Sandhurst in the United Kingdom in September 1981.  He was then commissioned into the Guyana Defence Force as a Second Lieutenant in February 1982. He was also trained in Brazil and the United States.

Brigadier Phillips was appointed the Chief of Staff of the Guyana Defence Force in September 2013 and retired in October 2016.