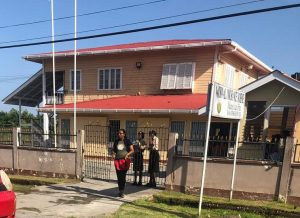 A Guyana Police Force officer said three men tied up the guards, took away a firearm belonging to one of the guards and then entered the building. The incident occurred around 1:30 am.

On retrieving the safe, Officer Ramlakhan said investigators were told one of the thieves kept the bullets and returned the gun to the guard.

None of the bandits was arrested, but police said they have detained the guards as investigations continue.

Sources said the money was for social security pensions.