Updated: Toshao beheaded by son-in-law while intervening in domestic dispute 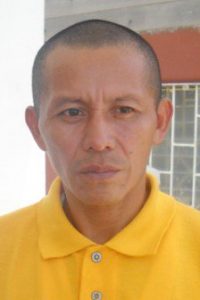 A Toshao in western Guyana was early New Year’s Day 2019 killed by his son-in-law when he intervened in a domestic dispute between his daughter and her husband, police aid.

Interior Police Divisional Commander, Senior Superintendent Kevin Adonis  confirmed the incident and said that a team has been dispatched to the area.

“Initial investigations revealed that the suspect was beating his wife and her father Solomon Lewis, age unknown, and his son Marvin Lewis, 27, intervened. The suspect became annoyed, armed himself with a cutlass and fatally chopped Lewis.

“He then turned his attention to his brother-in-law and injured him , after which he fled the area in a boat,” the Guyana Police Force said.  One of Marvin’s hands was severed.

Another source told Demerara Waves Online News that the incident occurred at Kurutuku Village at about 3:30 am when he and his son intervened in a domestic dispute.

The source said the assailant has since escaped into the jungle, and he was certain that villagers in the mixed Akawaio and Carib community would capture him.

Kurutuku is located in the upper Cuyuni area of Region Seven and is part of a cluster that includes Eteringbang which is near the Guyana-Venezuela border.

2019-01-01
Denis Chabrol
Previous: Guyana Police Force announces promotions for 2019
Next: OPINION: Guyana – a gathering place for all except locals