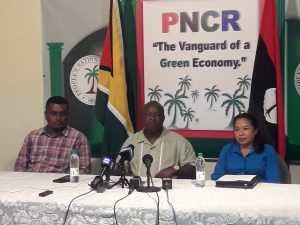 Executive member of the People’s National Congress Reform (PNCR),  Aubrey Norton on Friday claimed that former government parliamentarian, Charrandass Persaud was bribed to vote in favour of an opposition-sponsored no-confidence motion, but he did not provide any evidence to back up his claim.

Demerara Waves unreservedly withdraws any suggestion that Opposition Leader Bharrat Jagdeo was involved in bribery as there was no evidence provided by Norton to support his contention. A legal representative stated categorically that Norton’s claim was baseless.

Norton said the PNCR has incontrovertible evidence that could stand up in a court of law to back up his accusation against Persaud who has since been expelled from the Alliance For Change (AFC) component of the governing coalition. “All I can say to you is that we have done our groundwork. The police is the people who will have to do the actual investigation and even if we have the incontrovertible evidence, why would we tell you so they can prepare,” he said.

Head of the Guyana Police Force’s Criminal Investigations Department, Deputy Commissioner Lyndon Alves told Demerara Waves Online News that police have received no complaints of alleged bribery against Persaud or any indications from anyone that a report would be made or anyone has evidence to support such an accusation.

Norton,a former PNCR General Secretary, said the no-confidence plot against the David Granger-led administration part of a strategy to block investigations into crimes allegedly committed by members of the former administration.

Persaud and Jagdeo have already separately denied that a payment was made to the now former lawmaker to vote in support of the no-confidence motion on December 21, 2018 resulting in its official passage of 33-32.

Norton reiterated that the government was still studying a number of options, and that the PNCR was poised to “accelerate” and “accentuate” its readiness to go to the polls .

The Guyana constitution says the President and the Cabinet should resign on passage of a no-confidence motion and general elections should be held within 90 days. Jagdeo has since called for their resignation, but said he would be open for an extension for a few weeks or one month to allow the Elections Commission to properly prepare for the polls.

The PNCR Central Executive member declined to say whether he believed the correct count of the votes by the 65 parliamentarians is 33 or should be 34. He also did not comment on whether he thought the Guyana Elections Commission (GECOM) was ready to hold the elections within three months.