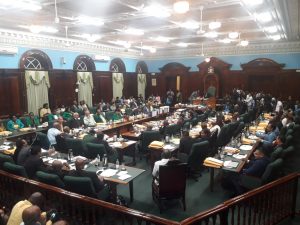 The Bharrat Jagdeo-sponsored no-confidence motion was approved by 33 of the 65 parliamentarians after Persaud voted in favour.

Quinn observed that the democratic process as laid out in Guyana’s constitution has been followed and that lawmakers must not be pressured into making decisions. “Members of Parliament must be allowed to undertake their constitutionally mandated roles in the absence of fear or favour,” he said.

With general elections now expected to be held in another three months instead of the latest by August, 2020, the British envoy urged Guyana’s politicians to campaign on issues. “We urge calm on all sides and look forward to a free and fair election and a campaign fought on the issues that confront Guyana and its future development,” he said.

Quinn hoped that protests, if held, would be peaceful. “Maintaining the fundamental tenets of democracy is paramount to us all and whilst everyone has the right to protest this must be peaceful,” he said. Prime Minister Moses Nagamootoo has already urged Guyanese to be calm and not to disrupt business activity.

The GTUC, the umbrella organisation of several trade unions, noted that the passage of the no-confidence motion with the support of a government parliamentarian indicates that “our democracy is at work and while the decision would not be favourable to all it is lawful and binding.”

At the same time, the GTUC called on Persaud and his Alliance For Change (AFC) political party to explain the reasons behind his decision to bring the government’s life to an end. “No longer should the public be made to accept, as norm, public officials making critical decisions without providing justification. The Coalition, but most specifically the AFC, needs to explain to the nation,” the trade union organisation said. Persaud has already said he was fed up with the coalition of A Partnership for National Unity+Alliance For Change’s (APNU+AFC) incompetence and failure to serve the needs of Guyanese since coming to power in May, 2015.

The GTUC also added its voice for peace and calm as Guyanese go into early general and regional elections in keeping with Guyana’s constitution and the Representation of the People Act. “Leaders must go all out to avoid or minimise triumphalism. All parties and citizens should be watchful of attempts to provoke conflict and create ethnic tension and mayhem. We still have a nation to build and a destiny to mould. We are One People, One Nation, One Destiny, and we cannot allow partisan interest to divide us,” he said.

Coming so soon after the November 12 Local Government Elections, the GTUC noted that spending on preparations for the general and regional elections would be a priority.

Government said it has felt betrayed by Persaud as he had never indicated his displeasure with the AFC and the David Granger-led administration. Persaud, who is expected to resign from the AFC or face expulsion, complained that himself, and three other AFC backbenchers, Audwin Rutherford, Rajkumar and Michael Carrrington, had “made a special effort by sending an email to the leaders of the AFC, asking that we, the AFC MPs have a caucus before we enter the National Assembly so that we can be better able to deal with the decisions and voting on the various bills that may be tabled. That plea fell on deaf ears,” Persaud said.

Opposition Leader Bharrat Jagdeo Friday night signaled that the PPP was open to some level of political cooperation with the governing coalition.