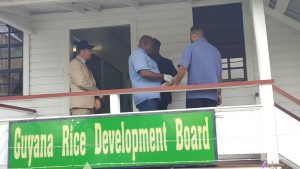 FLASH BACK: SOCU investigators at the Guyana Rice Development Board.

“I understand it not a salary. It is what is called a top-up for working at SOCU and we inherited that arrangement”,” Ramjattan told the House during consideration of the estimates for the 2019 National Budget.

“We continued working with this arrangement here and it is an arrangement that attracts certain people with qualification in finance,” he said.

Ramjattan stressed the importance of that special arrangement at SOCU. That unit earlier this year hired nine more agents as it seeks to expand its capacity and were paid from electricity charges.

It is headed by an Assistant Commissioner of the Guyana Police Force.