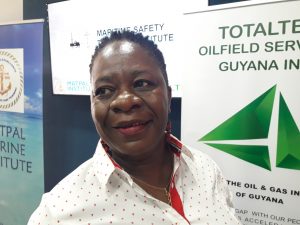 Guyana’s Maritime Administration (MARAD) is working towards the removal of wrecked ships and boats especially those in and around the Georgetown harbour where an upsurge in marine traffic is expected, a top official of that government regulatory and safety agency said Thursday.

Director-General of MARAD, Claudette Rogers told Demerara Waves Online News that, talks were underway with Guyana’s lone salvor to determine if he has the capacity to remove the wreckage. “We are in discussions with him and recognising that if he is incapable, we definitely have to seek other alternatives,” she said.

The MARAD official said the “critical” wrecks are located in areas that could be used for anchorage especially at a time when there is expected to be a spike in marine traffic due to the emerging oil and gas sector. “It becomes of importance that we seek to have them removed in the not too distant future,” she said.

Rogers said there are three wrecks mainly in the Demerara waters that need to be removed urgently. 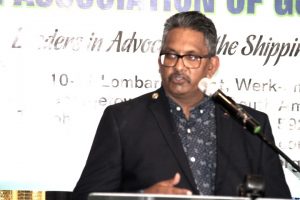 Secretary of the Private Sector Commission, Komal Singh last week sounded a warning about the dangers being posed by wrecks in Guyana’s rivers and coastal waters especially if fuel-laden single-hull vessels drift and slam into wrecks. “Imagine one day if that vessel lose power, runs into one of those wrecks and we have a thousand barrels of fuel oil spill in our waterway and our river runs about four knots to the hour and the tide is coming in and we have over-topping of walls; imagine the amount of issues that we’ll have locally. We won’t have any time to deal with all the big companies that are coming in and are drilling for oil a hundred miles offshore,” said Singh in an address to the 2018 Shipping Association of Guyana’s 8th annual awards and dinner.

The MARAD Director-General said the regulations would have to be amended to prohibit the use of single hull vessels because of concerns about marine pollution.  “You definitely would have to put the necessary regulations in place  for double-hull vessels and why exactly we would want for them to become compliant,” she said. Rogers said there are ongoing talks at her management level where they have agreed that ship owners must first be sensitized. 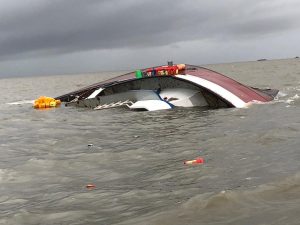 In terms of standing the cost of removing sunken vessels, Singh whose company, GAICO, provides salvaging services recommended that insurance coverage provides for removal of sunken vessels instead of government spending taxpayers’ money.

Singh who is also a member of the Shipping Association of Guyana’s Management Committee, restated a more than decade-old concern that the Demerara River was too shallow and could not accommodate large vessels with huge amounts of cargo. Recently, Finance Minister Winston Jordan said that was one of the reasons why the acquisition cost for fuels was increasing.