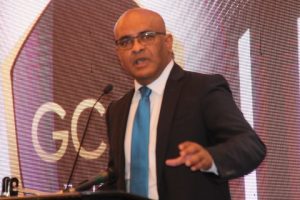 Opposition Leader Bharrat Jagdeo addressing the 2018 annual awards and dinner of the Georgetown Chamber of Commerce and Industry.

Opposition Leader, Bharrat Jagdeo is painting a bleak economic picture for Guyana, saying that the US$300 million annual oil revenues would be insufficient to guarantee improved standards of living from 2020.

Addressing the Georgetown Chamber of Commerce and Industry’s (GCCI) annual awards ceremony held Wednesday night at the Marriott Hotel, the former Guyana President forecast that the country was not expected to see significant development from 2020 to 2025.

“Even the oil companies, because they talk to me too, they don’t have such a rosy picture of the fortunes of Guyana changing drastically, dramatically in the time-frame that we think it will happen. It will happen but it’s going to happen not from 2020 to 2025. Those will be rough years for us because 300 million dollars coming in per year is really nothing if you look at what we have lost already and what 300 million means,” said Jagdeo, a Russian-trained economist and former Finance Minister.

Finance Minister Winston Jordan has already confirmed that Guyana’s projected earnings from Liza 1 would be about US$300 million annually from early 2020 when oil production is expected to begin at 120,000 barrels per day.

Under a World Bank-funded project, a company is next month expected to be hired- through a competitive procurement process in keeping with rules by that financial institution and government- to review the Liza Phase 2 oil field. A government official said ExxonMobil would be informed very soon after the review which is being done in partnership with that oil company.

Jordan last week urged Guyanese to focus on the future in which oil production would be a major economic plank. “The future is great. We got 5 billion barrels of oil that would start flowing from 2020 March and we are talking about the past….and we are trying to rile up sugar workers and so on for votes. Talk to the sugar workers about how they could get a piece of the pie. From 2020 and beyond, 5 billion and counting- that’s where the future lies; not in the past- glory of sugar,” Jordan, a Guyana and US-trained Economist, said in clear reference to the PPP’s opposition to the closure of several sugar estates and lay off of thousands of workers of the bankrupt Guyana Sugar Corporation.

Jagdeo said the US$300 million in oil revenues would be coming in at a time when oil prices are projected to rise again, a loss of 30,000 jobs in contrast to a gain of 1,000 oil sector jobs. “If we use some to pay the debt, some to pay for inter-generational equity, some for macroeconomic purposes and some on infrastructure- that’s it, it’s gone,” he said.

Jagdeo sought to assure attendees that we was not deliberately negative in contrast to government’s “rosy picture” for the post 2020 period, but the evidence causes his People’s Progressive Party (PPP) causes them to be “very worried”.  He said the David Granger-led coalition government has failed to stimulate rice, sugar is declining, increased taxes on mining, “dried up” retail trade and a downturn in construction.

“This is the same economic philosophy when were declared practically bankrupt as a nation and that we had to work hard to take this country from and return it to viability today and so we are returning there. There has been no help to industries, absolutely no help to industries, a loss of welfare, we are spending on consumables, we are borrowing more and we are taxing more and all of this will run out some time in the future. They are still living on past investments,” he said.

Finance Minister Jordan, in wrapping up debate on the 2019 National Budget, denied repeated claims by the opposition that government has imposed new taxes.

A number existing taxes and duties have been increased by the government since coming to office. At the same time, government announced  a number of Value Added Tax exemptions and reduction in other taxes for the business community. These have been largely welcomed by the umbrella Private Sector Commission (PSC).

Jagdeo on Wednesday night, however, chided the business community for not criticising government for taxing exports for the first time.

The former President cautioned Guyanese against being “grossly disappointed” but instead to be “realistic” based on the numbers. He acknowledged that Guyana would “do great in the future” through the massive transformational opportunity of oil and gas. “There is a time-lag to all of these things; not going to happen immediately and raising expectations like saying ‘we will give people  5,000 (United States) dollars per family.’ That’s a billion dollars per year you’re talking about; we’re collecting three billion,” he said.

Distinguished Economics Professor Clive Thomas earlier this year had in fact floated the idea of disbursing conditional annual cash payouts of about US$5,000 annually to very poor and vulnerable households aimed at improving their health, removing children from labour and putting them back in school.