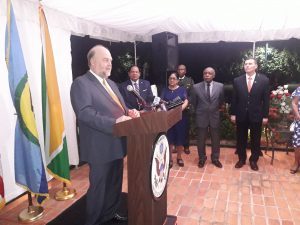 The United States (US)-headquartered United Airlines is exploring the possibility of adding Guyana to its list of destinations, as that Houston-based carrier seeks to take advantage of  the South American nation’s emerging oil and gas economy, officials said.

Junior Minister of Aviation, Annette Ferguson confirmed that United Airlines has set its eyes on the Guyana market and a delegation was soon expected to hold talks with top officials of the Guyana Civil Aviation Authority (GCAA). “They have signaled their intention of coming to Guyana so I think they are currently in talks with the GCAA,” she said.

Ferguson said she was optimistic that United would eventually reach agreement to ply the Guyana-US route and so give Guyanese greater travel and air-fare options.

Word of United’s interest in Guyana first came from outgoing American Ambassador to Guyana, Perry Holloway during an interview with sections of the media. “United is interested in coming to talk…It makes sense because the capital of the oil industry is in Houston, Texas and one of United’s hubs is Houston, Texas. I would expect that one of the airlines that would be most interested is United Airlines,” said Holloway whose three-year stint has come to an end.

Currently, Caribbean Airlines, Fly Jamaica, COPA Airlines and American Airlines are serving the Guyana-US route. But Holloway believed the time has come for another carrier to serve the Guyana-New York route. “I think the thing that is missing somehow, how you get it I don’t know but obviously…somehow we need to get another flight to New York that is what I think needs to be done. But how you do that I don’t know,” Holloway said.

Holloway has also retired from the US foreign service and would be taking up a job-offer in the American private sector.