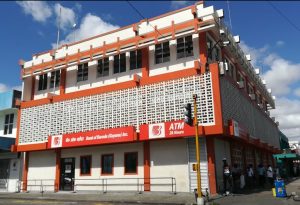 Bank of Baroda, Avenue of the Republic and Regent Street (photo by Denzil Thomas)

The Canada-headquartered Scotiabank and India’s Bank of Baroda have decided to sell out their operations in Guyana and other Caribbean countries due to declining profits and tighter anti-financial crimes legislation, Finance Minister Winston Jordan said.

“These banks consider doing business in these states not profitable anymore; not that it’s not making profits but it’s not profitable for them to continue because the risks have increased dramatically. They have to contend with this form and this regulation and that regulation. They have FATCA to deal with, they have anti-money laundering regulations and so forth to deal with so they don’t consider our territories to be profitable,” Jordan told the House in wrapping up debate on Guyana’s 2019 National Budget.

He said Bank of Baroda had signaled to government as far back as April, 2018 that it would be pulling out of Guyana, but the administration had failed to persuade that financial institution to remain here. He noted that Bank of Baroda plans to sell off its operations in Trinidad, African nations, New Zealand and The Bahamas. Instead, that bank intends to focus on the Middle East, a number of European countries, United Kingdom, Japan, Singapore and Dubai. 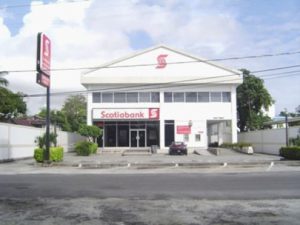 The Finance Minister called on Guyanese to explore investing in those commercial banks that are exiting Guyana. “What we have to do really is to see opportunity in these services and the opportunities exist for our businessmen locally, businessmen in the Diaspora and so on, to step up to the plate and get involved in these businesses,” he said.

Last month, Scotiabank announced that it had clinched a deal with Republic Bank to sell its operations in Guyana, St. Maarten and the Eastern Caribbean territories, including Anguilla, Antigua and Barbuda, Dominica, Grenada, St. Kitts and Nevis, St. Lucia, and St. Vincent and the Grenadines.

The purchase price is USD 123 million, which represents USD 25 million consideration for total shareholding of Scotiabank Anguilla Limited; and a premium of USD 98 million over net asset value for operations in the remaining eight countries.

Jordan boasted that Guyana’s investment climate, with 5 billion barrels of oil, should be sufficient for entrepreneurs to take risks. “Once that first barrel comes up, it’s going to galvanise so nobody is going to run from Guyana because they see a bleak future in Guyana,” he added.

Republic Bank, Citizens Bank and Demerara Banks, he said, have been recording profits.