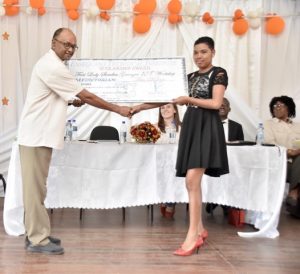 Best Graduating Student and Valedictorian, Ms. Atika DeJonge receives her scholarship from Chairman of the BIT’s Board of Guardians, Mr. Deleep Singh at the graduation ceremony.

Mr. Pearce extended the offer to Best Graduating Student Ms. Atika DeJonge and Second Best Graduating Student, Ms. Jada Hendricks, during the ceremony, which was held at the ETI. The scholarships are inclusive of free personal protective equipment, free textbooks and a work attachment during the July/August vacation period. All of the other participants were offered a 50 per cent reduction in registration fees to the institution.  The Principal also told the graduates that if they desire to assemble themselves into a group, transportation to the Institution would be provided at a reduced cost. 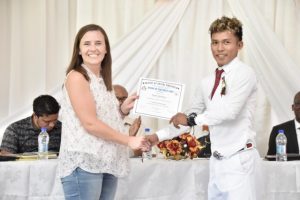 Meanwhile, Canadian High Commission’s Counsellor, Ms. Janine Cocker, in her remarks during the ceremony, said that the High Commission is continually impressed by the work which is done to organise workshops which improve the skill set of young people, for the benefit of communities.

“This is a great initiative and we are continually impressed by the thought and the calibre and community that goes into the organization of these workshops… Looking to the future, ICT for development is not only about computers and mobile phones and the internet, but about support and the training of human resources to link them to communities, and this is no doubt going to lead to increased productivity, support for innovation and the impetus for inclusive growth,” Cocker was quoted as saying in a Ministry of the Presidency statement.

In addition, Chief Executive Officer of the Board of Industrial Training (BIT), Mr. Richard Maughn encouraged the graduates to strive to overcome obstacles along their paths to success.

“I want to tell you about the dream job syndrome, [there are] people  [who] believe there is only one path to take them to their dream job… because of certain circumstances you may not have gotten that job and you decide not to do anything…Sometimes the dreams that you have for yourself [are] too big to travel on one road, sometimes you have alternative paths you have to use to ensure that you get to your dream job,” he said.

The five-week workshop was held in collaboration with the Ministry of Social Protection’s BIT unit.  It is the fifth and final one for 2018 and some 200 youth have benefited.  The workshop will start again in January, with the first one scheduled to be held in Linden.

Chairman of the BIT’s Board of Guardians, Mr. Deleep Singh also attended the ceremony.