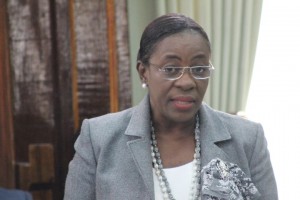 Henry also used the opportunity of her contribution to the debate on the 2019 National Budget to make it clear that a number of the problems inherited on the coalition coming to power in May 2015 could not be fixed in three years. “It is difficult to imagine how anyone can be in government for 23 years and then in three short years turn around and paint a picture of doom and gloom and realistically think that they can be extricated,” Henry said. “Mr Speaker, in my sector alone we have spent an inordinate amount of time cleaning up the mess we have inherited from the last administration,” the Education Minister said.

Among the initiatives, she said government has rolled out in less than three years are transportation, school-feeding, psycho-social and counselling support, reintegration of teenage mothers and teaching-learning technologies. “We are no longer buying computers from barbershops,” she quipped. Henry also announced that the school-feeding programme would be further expanded in all 10 administrative regions, riding on the success of  providing meals to more than 25,000 in 2018. “This initiative has yielded results in attendance, poverty alleviation and, according to the Human Rights framework, the right to adequate nutritious food at the highest attainable standards of health to reach their full physical potential,” she added.

In the area of curriculum reform, she said since 1956 this is the first time that Guyana is doing so, with the framework being drafted. Henry also said that for the first time in 2019 the Ministry of Education would be implementing robotics, coding and animation in primary schools. “This, of course, will leverage the gains we have made with the implementation of smart class rooms, IT clubs and IT labs in 2018. We know that no country can deliver education in this present age without technology-enabled learning,” the minister added.

Labelling the 2014 National Grade Six Assessment results were “appalling” as 23 percent were passing English, 25 percent Mathematics, 37 percent Social Studies and 23 percent Science compared to results in 2018. This year, she said the figures show an “incremental improvement” with a 60 percent pass rate in English and similar improvements in other subjects. Dropout rates have been reduced from 813 male primary schools students in 2014 to 368 students in 2016.  Female primary school students totalling 726 students dropped out in 2014, but it was 279 in 2016. At the secondary level, she said 1,480 males dropped out in 2014 to 1,202 in 2016 and from1,269 females to 833 over the same period. 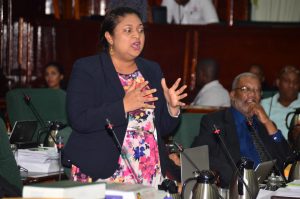 Manickchand welcomed government’s allocation of GYD$3.7 billion in next year’s budget to build three secondary schools at Westminister/ Parfaite Harmonie, Good Hope, Kuru Kururu that had either been planned or started before to take the country closer to universal secondary education. She, however, registered her concern that about a almost GYD$1.7 billion increase in operational costs. “This is not going towards buying stuff for children, putting programmes in place, implementing programmes, executing programmes,” she said, expressing further concern about the Education Ministry’s return of GY$2 billion to the consolidated  fund. “How could you return money and tell me that we have children in schools without textbooks and their parents can’t afford it and you come here and tell me you can’t afford to give 10,000 dollars to each child,” she said. Those funds, she argued,  could have also been used to pay teachers increased salaries and avoid a strike earlier this year.

But Henry found favour with reports that the GYD$10,000 cash grant was an election gimmick that was not sustainable.

In responding, Minister of Education, she accused the opposition parliamentarians of churning out “farcical information” since the budget debate began on Monday. She said the opposition lawmakers did not refer to the administration’s success in dealing with the “de-bunching mess” of teachers’ salary scales dating back to 2011 that was inherited from the People’s Progressive Party (PPP).

Before the Minister of Education presented what was supposedly her rebuttal, Manickchand criticised the government for side-stepping an offer in March, 2018 by a group of pandits, moulvis, pastors, social activists, teachers including government members to conduct an outreach on violence against women and children. “This year, we wrote, not the PPP; we wrote as a group of persons trying to do that. We got a letter back from the ministry, saying we want to see your CVs (curriculum vitae of qualifications and experience), you can’t go into schools and speak. This is pastors and pandits and activist that work in this country every single day… That is the petty leadership that is coming from the ministry, petty and not serving anybody,” she said.

Manickchand recalled that when she was Education Minister, then opposition parliamentarians had been among those invited to go to schools to deliver presentations on domestic violence back in December, 2014. She also registered objection to the Ministry of Education, through the Regional Education Officers, asking headteachers and principals who they had planned to invite as guest speakers at their graduations after she addressed one of them at the Rosignol Secondary School on November 9, 2018. “Sadly, on the 10th of November the Ministry sent out to all the schools across this country, through the Regional Education Officers, to say ‘to tell me who is going to your graduations to speak, we want to know. We want to know their names, we want to know their CVs. Sadly, that is the petty leadership coming from the ministry. Instead of us getting together to work for the Guyanese children, that is the petty leadership we see coming from the Ministry of Education,” she said.

The PPP frontbencher “demand” that the government re-introduces the widely consulted on Education Bill that was tabled in 2015 in the National Assembly. “The Education Act is over a hundred years old. It does not serve our children anymore. It cannot serve our children anymore,” she said. Manickchand further called on the government to keep its promise and lay the now three-year old Report on the Commission of Inquiry into the State of Education in the National Assembly. “If it was that you don’t like it, toss it out and tell us that you are not using it but you cannot hide it from the nation,” she said. Manickchand also urged government to continue the Early Childhood Education programme and reintroduce a five-year plan for the education sector.

However, the Education Minister said there have been improvements in numeracy and literacy among nursery students in remote areas. She said in 2014 about 60 percent of the children were not reading-ready, with fewer than 10 percent could have understood texts and 40 percent had very little or no ability to identify any numbers from one to 10. She said a recent publication notes that overall 90 percent of Guyana’s children now master reading and math skills compared to 37 percent in 2016.

The debate on the GYD$300 billion 2019 budget would be completed later this week, paving the way for the consideration of estimates before the appropriation bill is passed some time next week.