Granger for five rounds of chemotherapy; treatment continues until next year 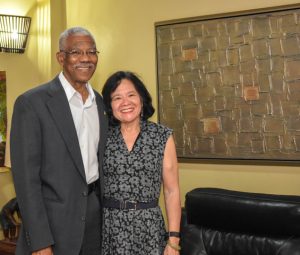 Ahead of President David Granger’s departure for Cuba on Tuesday for more cancer treatment, he said in all he needs five rounds of chemotherapy.

He left Tuesday for Cuba’s Centro de Investigaciones Médico Quirúrgicas (CIMEQ) for the second of five rounds of chemotherapy.

He is due to return to Guyana by weekend.

The Ministry of the Presidency quoted the Guyanese leader as saying he needs a total offive rounds of chemotherapy.

His treatment regimen is expected to be completed by May, 2019.

“In my first visit, I had not only the biopsy but a series of tests and examinations and I also had my first cycle of chemotherapy.  I now have to return for succeeding five cycles, so this is the second cycle and I hope to return much more quickly than I did the first visit because this is simply the administration of chemotherapy so presumably after the tests which will be done today, Tuesday, I will have the chemotherapy and return by weekend,” President Granger was quoted as saying.

The President, who is accompanied by First Lady, Mrs. Sandra Granger, said after this round of treatment, he will have to return to Cuba later this month for the third cycle of chemotherapy.

“I expect that by the start of the new year my progress, which has been gradual so far, will be sufficient to allow me to take on more duties,” he said.

Meanwhile, the President expressed much gratitude to all who sent their well-wishes for his full and complete recovery.

“I think my illness, although personally unfortunate, has brought forth a response by the Guyanese public, not to a politician, not to a political leader, but to a national President.  I think they feel the presidency is what is being jeopardised by this threat to my health and I think what I have seen so far, both privately and publicly, are favourable national concern that the Head of State, whomever he may be, should enjoy the best health,” he said.

President Granger also thanked Caribbean Heads of Government, business leaders, his colleagues, the churches and the public particularly those who held vigils while he was in Cuba, for their prayers and support.

“I am encouraged and, you know, in certain medical situations that psychological and psyche factors are very important.  I am very grateful, very thankful.  I look forward to resuming my full duties as early as possible,” the Head of State said.

President Granger and Mrs. Granger had traveled to Cuba on October 30, 2018 for a medical investigation. After an intensive series of tests by specialists doctors, he was diagnosed with Non-Hodgkin Lymphoma. The President and his wife returned to Guyana from Cuba on November 20, 2018 after a number of medical interventions including the first round of chemotherapy treatment were performed.