Volda Lawrence calls for “equality for all” ; orders ministers, PNCR leaders to “get out of their offices” to do political work

The Chairman of the People’s National Congress Reform, Volda Lawrence on Saturday called on government ministers and party leaders to engage in outreach to the grassroots and dealing with their problems in the equal provision of good and services.

“If this means that Ministers and party leaders must get out of their offices and work regularly within these communities, we must put programmes in place to make this happen. Service must be people centered…”, she was quoted as saying in an address to the PNCR’s General Council on Saturday.

At a PNCR Region Four District Council meeting she rallied delegates to fan out into communities and cease bickering about whether she, Joseph Harmon or Basil Williams should have been elected to the Chairmanship or the party risked losing the next general elections that are constitutionally due by August 2020.

The PNCR has already publicly acknowledged at more than one fora that one of the reasons for losing support at the recently-held Local Government Elections was because the party had lost contact with some of its supporters and others had become disgruntled by the quality of services that had been delivered by councillors who had been elected at the 2016 local government elections. The PNCR has also acknowledged that some supporters might have felt that their expectations had not been met.

In calling on the PNCR to embark on a massive membership drive to broaden and strengthen that political organization’s base, Lawrence said her party must be committed to”equality for all”.

“We must be ready to fortify grass-root democracy by playing a greater role in local government country-wide and by providing solutions to rural, and agrarian problems. With this, the party must be totally committed to enduring equality for all and to protecting our citizens’ fundamental rights,” she was also quoted as saying.

The Party Chairman stated that the PNCR remains committed to achieving national unity and to improving relations with all communities and groups.  She said now was the time for her party to recharge and retool its base. “No one must be left behind. Now is not the time for armchair service. Now is the time to work the ground tirelessly and dutifully,” she was also quoted as saying. 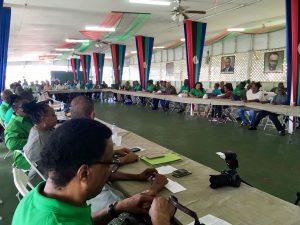 The PNCR’s General Council in session on December 1, 2018.

The PNCR Chairman’s citing the need for no discrimination came less than one week after she landed in hot water over her remarks at her party’s Region Four District Conference that party supporters should be afforded contracts and jobs. “The only friends I got is PNC so the only people I gon give wuk to is PNC and right now I looking for a doctor who can talk Spanish or Portuguese and ah want one that is PNC,” she said on November 25, 2018.

Political Scientists, David Hinds and Freddie Kissoon, who are staunch opponents of the People’s Progressive Party (PPP), have since forecast that Lawrence’s remarks could spell the governing coalition’s defeat at the 2020 general elections.

Hinds, whose Working People’s Alliance is part of the governing coalition, has acknowledged that there is need to address PPP-inspired ethno-political imbalances in Guyana. At the same time, he has accused the PNCR of failing to craft policies to address those imbalances but dealing with them crudely. “In the absence of real policy initiatives to pitch to that group, she has to resort to crude clientelism. I read her “PNC friends” to mean African Guyanese. She is a political operative and knows what she is saying. But because the contemporary PNC leadership has never mastered the art of creatively addressing our ethno-racial problem, they have to fall back on this crude narrative that borders on party-racial clientelism,”