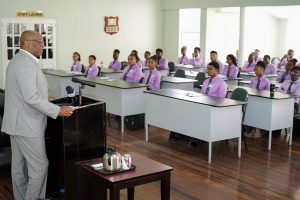 Minister of State, Mr. Joseph Harmon addresses the second graduating class of the Bertram Collins College of the Public Service.

A day after news broke that People’s National Congress Reform (PNCR) Chairman, Volda Lawrence indicated that party supporters should not be deprived of jobs and contracts and that she would be employing her friends who are all party supporters, the Minister of State Joseph Harmon said the public service must be politically neutral.

“The new public service, therefore, has to be able to deliver in an administratively neutral way and has to be established firmly on the basis of merit and political impartiality,” Harmon was quoted  as saying by government’s Department of Public Information.

He was Thursday delivering a presentation to the second  graduating class of the Bertram Collins College of the Public Service.

On Wednesday, Demerara Waves Online News reported Lawrence as telling delegates at a Region Four PNCR District Conference that they should not be worried about giving PNCR supporters jobs and contracts. She has also said that, with all her friends being PNCR, she would giving jobs to party supporters.

Harmon came second to Lawrence for the post of Chairmanship of the PNCR at its congressional elections held last August, at the end of a campaign that had seen contenders crisscrossing the country and visiting Canada and the United States to canvass support.

Harmon said there were a number of changes occurring within the public service and urged the major players in the sector to fully understand their roles and functions. “It must also possess expert knowledge and a high standard of academic education.  In addition, it should consist of men and women of integrity who are reliable and willing to give advice without fear or favour, partiality or prejudice,” he said.

The minister’s presentation formed part of a five-day lecture series organised by the college for cadets who are soon to graduate from the nine-month training programme. Minister Harmon told the cadets that the quality of the public servant must be impeccable.

“When someone goes to your office to require service, you say this is what you have to do, that is what they must do. They must not be told to ‘pass a raise’ and it will be expedited for them. You’re in the wrong place if you are doing that.”

Minister Harmon said the process of modernising the public service must make it more responsive, fair, efficient and effective. For that to be achieved, he said, there must be a concerted effort to enhance the management capacity administrative efficiency and skills level of all public servants.

Earlier last week, Prime Minister Moses Nagamootoo delivered a lecture to the cadets where he called on them to perform the duties as future public servants with integrity.

“I believe that once you do your work faithfully, as a public servant, your advice, your contribution would be of worth.  It would be of value to society…  Your duty is to your country…  It is a patriotic duty and, in my book, the call to duty as a patriot is perhaps the greatest blessing we have,” the Prime Minister said.

The Bertram Collins College of the Public Service will be graduating its second batch of cadets in December. The institution, a brainchild of President David Granger, is committed to instilling integrity, impartiality, and objectivity in the next generation of public servants