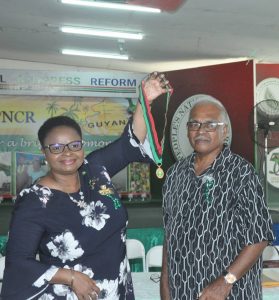 PNCR stalwart, Mr. Latchman Sammy being awarded with a Party medal in honor of the Party’s 60th anniversary which was celebrated in October 2017. Mr. Latchman lives overseas and is presently visiting his home land. (PNCR photo)

Ahead of the first meeting of the recently elected councillors, the People’s National Congress Reform (PNCR)-controlled A Partnership for National Unity (APNU) has hatched a plan to remove the People’s Progressive Party (PPP) councillors in Georgetown, East Coast and East Bank Demerara.

For the first time, the PPP has been able to clinch so many seats – seven – in the traditional PNCR stronghold of Georgetown. Four of the PPP’s seats were won through the Proportional Representation (PR) component and three through the first-past-the-post constituency system at the November  12, 2018 elections.

While experts said the constituency seats could be vacated by resignation or death, PNCR Chairwoman, Volda Lawrence told party faithful of her party’s Region Four District Conference that her party has hatched a plan to remove the PPP councillors before the next Local Government Elections (LGE) constitutionally due in 2021.

Lawrence did not go into details about the plan.

She told the largely Afro-Guyanese party faithful that the mainly East Indo-Guyanese-backed PPP had 28 candidates “looking like you running in Georgetown and two looking like (Bharrat) Jagdeo. “Do you understand the strategy”? she asked as she recommended that the PNCR also attract and profile other persons as part of a social cohesion policy.

“We got to bring more like them in…Comrades, politics is a numbers game,” she said.

She urged PNCR members to use the results of the recently-held LGE and work towards reclaiming the seats lost to the PPP  in East Bank and East Coast Demerara Neighbourhood Democratic Councils such as the one governing Buxton-Foulis where the opposition party won two seats. “You see dem seats on the East Bank and East  Coast, we must tek it back, Comrades. We must take it back and I want to tell this to you. We don’t have to wait no three years, Comrades. There are mechanisms for us to go back to the polls,” she said.

The PNCR Chairman challenged her party’s supporters to go back to those NDCs and “take them over” because the defeat was “just by a few votes”. “Leaders of Region Four, go back to the drawing board, take the statistics which you have and start to tick them off one-by-one, Comrades. Before the three years out, we must have another election going on in those constituencies,” she said.

Lawrence suggested that sufficient work was not done by party activists in some areas and some voters were disgruntled because they did not get expected benefits from the coalition-led central government, and there had been poor delivery of certain public goods.