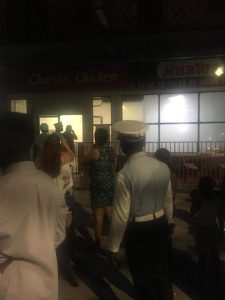 A stove flare-up at Church’s Chicken  (Bartica branch) was Monday night quickly put out by staff and fire fighters, and the building was not damaged, an official said.

The official said the fire ran along the duct. The outlet was filled with thick black smoke during the blaze.

Other sources said a stove exploded at about 8:30 PM.

The three-story building is located on First Avenue and Third Street opposite the Bartica Police Station.

An official of Church’s said a team would be travelling to the Bartica branch to conduct an inspection.

The outlet is expected to resume operations on Thursday after a mopping up operation.

Up to recently the building had housed Guyana Revenue Authotity (GRA) offices on the first floor.

The building is owned by the Williams brothers.

2018-11-21
Denis Chabrol
Previous: El Dorado offshore-hired seafarers won’t be punished for disclosing wages to govt, unions
Next: Police being trained to help turn down the volume