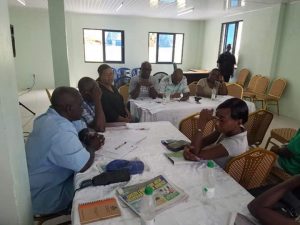 Minister of State, Joseph Harmon has vowed that People’s Progressive Party (PPP)-majority local development councils and PPP supporters, who work in government agencies, would no longer be allowed to undermine the administration and discriminate against coalition support bases.

Addressing a Local Government Elections Thank You rally at ‘C’ Field Sophia playground, he said it was time for A Partnership for National Unity+Alliance For Change (APNU+AFC) to consolidate itself. He warned that central government would no longer tolerate the PPP-controlled Neighbourhood Democratic Councils (NDCs), such as those in Region Three (West Demerara-Essequibo Islands) that are neglecting villages that are government strongholds.

“The people are saying to us: Aren’t we in government? Well, I want you all to know that we are in government and that foolishness got to stop. No NDC, because it’s controlled by the PPP, will take government money and just spend it on PPP areas. It’s got to stop and we are going to work and fix that. We are not going to accept that,” he said to loud cheers by many of the estimated 150 attendees.

The State Minister singled out PPP Campaign Manager for Grove, East Bank Demerara, Steve Rafeek, who was recently arrested for allegedly stealing fuel markers from the Guyana Energy Agency, as an example of the type of persons government would root out of the system. He said Rafeek was hired by GEA Chief Executive Officer, Dr. Mahender Sharma. “We got to stop that foolishness. We are not going to accept that. They will understand this time it’ a serious government we are dealing with and everybody who facilitate the ‘thiefing’ and all of that, they got to go with them. It’ a simple matter. We have been very nice and easy going along…but in the meantime what our people are saying on the ground is that they are suffering, that we have a lot of people there who are positioned there by the PPP, stymieing the work of this government, stymieing the services which are to come to people and they are still there. Well, no more of that, no more of that comrade, no more Mr. Nice Time business. We got to fix these things,” said Harmon.

Harmon, who is APNU’s Campaign Manager for Region Three, and other top party officials reviewed the performance of that political organisation at the November 12, 2018 Local Government Elections. The announcement by APNU that it plans to consolidate, reconnect and re-energise its base comes against the background of a 36 percent turnout countrywide in which the PPP picked up 386 of the 596 Proportional Representation seats countrywide compared to 188 by APNU.

At the regional level, in Region Five and Region Two, where the PPP commands a majority at the Regional Democratic Council, the Regional Executive Officers and their administrative officers who are appointed by Central Government have been executing decisions that have not always been made or approved by those regional councils.

Declaring that APNU+AFC campaigning for the 2020 general elections began Saturday night, he assured that government would deliver on its promises. Earlier in the meeting top executives of the People’s National Congress Reform (PNCR) appealed to supporters. including youths to turn out in large numbers to vote for the incumbent coalition-led administration.