UG announces unilateral pay hike but insists on ‘no grades, no increases’ policy 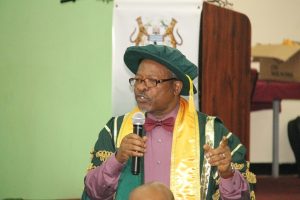 The University of Guyana (UG) has announced an increase in salaries for academic and non-academic staff for this year, saying the administration and unions failed to actually negotiate the package.

Vice Chancellor, Professor Ivelaw Griffith maintained that only lecturers who have submitted grades would be receiving the increase.

“The Administration maintains the principled position that performance will be a factor in this exercise, and that no academic staff with outstanding grades will be granted the increase,” he was quoted as saying in a statement.

“Although the 2018 negotiations with the unions never moved beyond differences over the agenda, I felt obliged to act on what we had planned all along to do; that is, to offer a salary increase for 2018.” He further emphasised that,” he added.

The publicly funded tertiary institution said its Finance and General Purposes Committee, on Wednesday, November 14, 2018, unanimously approved the request of Vice-Chancellor Professor Ivelaw Griffith for salary increases at the rate of 3% for all eligible academic staff and 4% for all eligible non-academic staff, retroactive to January 1, 2018.

These increases will be paid to staff members of the University of Guyana by Thursday, December 20, 2018. Considering the increases granted for 2017, UG says this makes the combined increase over two years 9% for UA staff and 12% for UB workers.

Noting that allowances, such as the 20 percent for housing, are tied to salary increases,  UG said the overall adjustments  would cost the University G$ 81.34 million. The Vice-Chancellor noted that while the percentage increase is modest, it is guided by the principle of affordability; G$81.34 million is what the university can afford at this time. Additionally, the increase is granted knowing that there is an understandable expectation by staff members for some form of financial relief for the year.

In making the announcement of the salary increase, the Vice-Chancellor took the opportunity to thank all staffers— in Estates Management, the Faculties and SEBI, the Registry, Library, Bursary, Centre for Information Technology, Software Development, Personnel, Institute of Distance and Continuing Education, Safety and Security, Berbice Campus, and the Vice-Chancellery, which includes the offices of the Deputy Vice-Chancellor’s— for their dedicated service to students and the university community as a whole during the year.

He highlighted the University’s 52nd Convocation held on Saturday, November 10, where 1,739 students graduated, as evidence of truly talented and caring members of the university family who go beyond the call of duty in their various units.