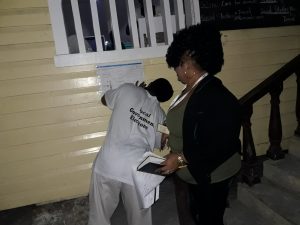 A statement of poll being posted outside a polling station at St. Ambrose Primary School, Alberttown, Georgetown. Looking on is an APNU candidate.

The Alliance For Change (AFC) appeared to have been virtually  wiped out of the local government political landscape, leaving A Partnership for National Unity (APNU) trailing behind the People’s Progressive Party (PPP) overall in many key local authority areas.

Unofficial results show the People’s National Congress Reform-backed APNU clinching almost all of the 15 constituency seats in Georgetown, Guyana’s capital. Among the victors are incumbent Mayor, Patricia Chase-Green who scored big over AFC and certainly the PPP in her constituency.

At Whim, Corentyne, the hometown of Prime Minister Moses Nagamootoo, his AFC also recorded a poor showing in favour of the PPP.

The AFC contested Monday’s elections separately, unlike 2016 when that party did so jointly with APNU.

A cursory look at statements of poll posted up at several polling stations in Georgetown shows APNU holding its own in its traditional Afro-Guyanese strongholds, but taking a beating from the PPP in its  East Indian strongholds such as Kitty and Campbellville.

In constituency one (Kingston-Alberttown-Queenstown), Pandit Ubraj Narine, a newcomer to the political scene, picked up significant wins for APNU.

Unofficial results also show APNU cleaning up all the seats in Linden, a traditional stronghold for the PNCR / APNU. Similarly, APNU also recorded healthy victories in other strongholds of Bartica and New Amsterdam.

The PPP claimed victory in its traditional strongholds of Rose Hall, Corriverton and Anna Regina. That party also boasted of wresting control of Lethem and Mabaruma from APNU and AFC control.

The Guyana Elections Commission is expected to provide more official results on Tuesday.