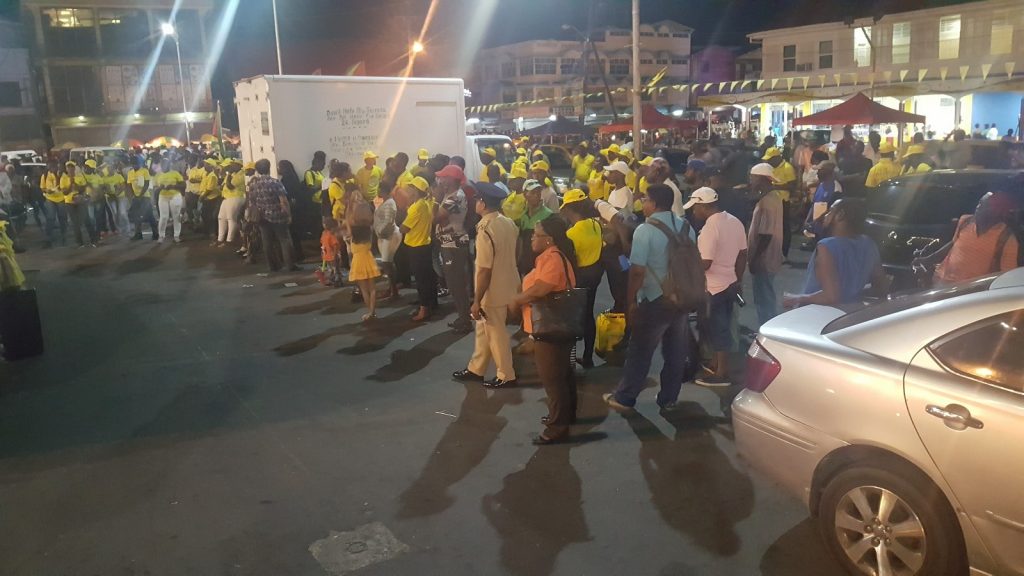 The Alliance For Change (AFC) hammered its coalition partner’s -A Partnership for National Unity- performance in the Georgetown City Council, while seeking to woo support around big ticket issues.

The core group of attentive attendees at a public meeting held at Stabroek Market Square numbered about 120 persons, almost the same as APNU’s meeting held at the same venue two weeks ago. About half of the attendees were appeared to be party activists and members as they were uniformly clad in AFC campaign jerseys.

In Local Government Elections scheduled to be held on November 12, 2018, the People’s National Congress Reform-dominated APNU is hoping to win back control of City Hall and shut out the  AFC as much as possible. The PPP wants to capture sufficient seats around the horse-shoe table to wield negotiating power in decision-making.

In that regard, Patterson contended that the PPP’s position was aimed at shielding its supporters from paying steep rates and taxes for huge buildings they have constructed across Georgetown in recent years. “He is trying to protect his own nest and I’ll tell you why. That politician is trying to scare you about rates and taxes but it is not you who are going to pay rates and taxes; it’s those people who put up those eight and nine- story building and only paying 8,000 dollars a year. Those are the people he is trying to protect,” Patterson said in clear reference to PPP General Secretary, Bharrat Jagdeo. With city rates and taxes having been increased 22 years ago, Patterson said it was unlikely ordinary people would pay increased taxes. “You better reject that idea about increase in rates and taxes because if we do it right, you may not even have to pay a cent. You might even go down back because if we get the right amount of money from them….less for you because you only have a one-story ‘choo-choo’ building,” Patterson added.

Former Deputy Mayor, Sherod Duncan, during his chairmanship of the public meeting, spared no effort in pummeling City Mayor, Patricia Chase-Greene and Town Clerk, Royston King. Referring to allegations of financial mismanagement and personal benefits that have surfaced at the Commission of Inquiry into the operations of the municipal administration. “…The King of the city and the kinds of mismanagement that occurred under Royston King and Patricia Chase-Green who don’t have the shame to step aside and let people come forward who really got the interest of Georgetown at hand,” he said adding that $74 million were spent on the Constabulary Training Complex on Water Street but there is not even a desk or bench, $150 million on the cemetery on the flooded and thickly vegetated Le Repentir Cemetery and limited accountability of GY$350 million that central government had provided. “That is the administration that Chase-Green has presided over this City in the last three years. Chase-Green is Royston King and Royston King is Chase-Green and every vote for our friends on the other side is a vote for that team and putting that team back in place who has done nothing for Georgetown. I say that without any fear of contradiction,” he said.

AFC Chairman, Khemraj Ramjattan praised Duncan’s stance against parking meters, indicating that it was part of their party’s strategy to preserve its identity by identifying him as the AFC’s spokesman on behalf of the municipality. “I want to say that that statement today identified the Alliance For Change as something strongly separate and with an identity of its own and we are reaping the benefits of it today because, having not done that it would have meant that we are associated with some of the negatives that are not coming out in that inquiry that is being held by (Retired Chancellor of the Judiciary) Cecil Kennard,” said Ramjattan.

Ramjattan hailed President David Granger’s insistence on holding local government elections every three years in keeping with Guyana’s constitution as it helps to build social cohesion. Ramjattan said the local polls gives his party an opportunity to groom young leaders at the community level. In the 52 years of Guyana’s independence from Britain, local government elections were held three times.

Neilsen Mc Kenzie, who works on drainage and other infrastructural works at the Ministry of Public Infrastructure, said it was not the City Council that was responsible for improvements in Georgetown areas such as the Ruimveldts, Lodge-Meadow Brook, Kitty-Campbellville and Stabroek. “When we came in in 2015, several things started to change and I want to point you to the fact that the AFC- the Alliance For Change- was in the forefront in the transformation of Georgetown. You might hear in another quarter that it had to do with some City Council but I want to assure you that…you will find out that the Alliance For Change was the dominant force, bringing about the relief, bringing about the drainage, bringing about the de-silting, bringing about the transformation in our capital city,” he said.

Mc Kenzie said the 13-year old AFC was a transparent and accountable party with people of integrity rather than executive lawlessness and corruption.

19-year old Britney Eversely of Constituency 10 (Albouystown/Charlestown) appealed to Georgetown youths to cast their ballots in the community oriented elections so that they could legitimately hold elections accountable because they could not complain if they do not vote. “It is important for all the young people to vote because when we don’t vote, we leave it up to other persons to have a say in decisions that will be made on our behalf, in decisions that will be made that will affect us directly so it is important that we vote so we have an opinion and we have a say in our lives because it is our country,”  she said.

The last Local Government Elections, which were held in 2016, had seen APNU and AFC controlling the majority of seats in City Hall. However, major differences had emerged between the two parties over transparency and accountability about the now aborted metered parking project and the removal of vendors from a number of city streets near the Bourda and Stabroek Markets without Council’s involvement or approval.