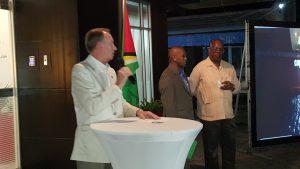 Guyana’s oil and gas industry is already boosting jobs, standards and investment opportunities ahead of first oil expected in early 2020, and the work-ethic by Guyanese aboard support vessels for ExxonMobil is already coming in for high praise.

“We are just extremely pleased with all of the employees we have working with us so far and their attitude and their energy and their excitement and they remind us very much of the Cajuns back home,” said Daniel La Font, Head of Business Development at Edison Chouest Offshore, a United States (US)-headquartered company.

In Trinidad and Tobago, the company employs almost 100 nationals of that twin-island nation, and 95 percent in Brazil. The 58-year old Louisiana- based Edison Chouest Offshore operates almost 300 vessels worldwide and employs 10,000 persons.

Speaking at the official launch of  its local affiliate, G-Boats- a 50 percent-owned company by John Fernandes Limited Friday evening, La Font said the company has already hired 68 Guyanese who are working aboard 10 vessels that are supporting ExxonMobil’s exploration and planned production operations more than 100 miles offshore Guyana. As more oilfield operations come on stream, La Font said more Guyanese would be trained and employed.

Head of the Ministry of the Presidency’s Department of Energy, Dr. Mark Bynoe hailed the launch of G-Boats as one of the “positive strides the country is making as a place for doing business, increase investors’ confidence and emphasising that the benefits from the oil and gas sector will redound to Guyana and Guyanese in direct, indirect and through various multipliers”.

Bynoe highlighted what he termed “green shoots” in the form of shore-bases being constructed, contracts being signed, capacities being built, standards being lifted and jobs created”.

With four more Guyanese expected to be employed by G-Boats, Bynoe urged Guyanese to consider the spin-off effects. “It is easy to smirk at these numbers but to one of the 42 oil service riggers, this venture means a secure livelihood or fire one of the five oilers an improvement in their quality of life. Moreover, their skills are being built making them significantly marketable to when they comnenced working,” he said.

The Head of the Energy Department singled out the improvement in standards the emerging oil and gas sector is bringing to Guyana. “The successful development of the oil and gas sector is vital fir this transformation in terms of its catalytic impact and raising of the standards necessary for increased competitiveness of firms and industries,” he said.

The Guyana government official told “my fellow Guyanese who may say that oil and gas has done nothing for me” that there is increased aviation traffic, increased revenues, increased earnings to taxi drivers, more hotels being built or expanded. “…all being made possible through the multiplier effects of the emerging oil and gas industry and this is just the mere beginning,” he added.