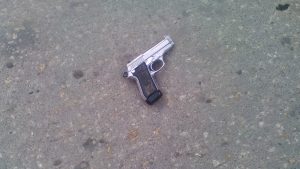 One of two bandits, who had earlier stolen a taxi driver’s car and escaped, was killed after he opened fire at police who cornered them during a second escape bid, the Guyana Police Force said.

The dead man has been identified as 27-year old Melroy “Souse Mouth” Solomon of Titus Street,Agricola, East Bank Demerara. Police said he was previously charged with armed robbery. He was pronounced dead on arrival at the Mahaicony Cottage Hospital, police said.

The occurrence began at about 10:50 AM at Foulis, East Coast Demerara where a taxi driver was allegedly robbed of his AT 212 motor car and personal items in 7th Street, Foulis by two males who hired him for an East Coast destination.

The matter was reported and the stolen vehicle was intercepted by police ranks in an unmarked vehicle ,at Mahaicony.

“The suspects reportedly,discharged several rounds which struck the vehicle and sped into Esau and Jacob Village, Mahaicony but were later forced to abandon the vehicle after it got stuck in a ditch and they escaped in the backlands.

The suspects then allegedly abducted and robbed a cattle farmer of his phone and clothes and ordered him to take them out on a horse to a location at Branch Road Mahaicony that leads to the public road,which he did .

The perpetrators then boarded a taxi and was again intercepted by the police who ordered the men out of the vehicle; one of the suspects quickly exited with firearm drawn and began shooting at the police who adapted tactical positions and returned fire during which the gunman was shot and the car sped away,” the Guyana Police Force said.