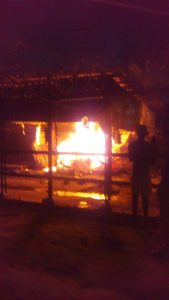 The unrest at the Lusignan Prison, East Coast Demerara might have been triggered by poor quality food and general conditions at that penal facility, if the complaints by inmates are anything to go by.

In a statement issued by the Ministry of Public Security, several areas of the Holding Bay were damaged and items such as mattresses burnt.

Authorities said after two hours of unrest, calm was restored.

A United Nations Mission had recommended the immediate closure of the Lusignan Prison because of the inhumane conditions there. The Guyana Private Sector Commission in August,  2018 also expressed grave concern about the conditions of that penitentiary.

Following is the full text of the statement:

On Monday, October 15, 2018 at about 4:16 PM, a number  prisoners in the Holding Bay at Lusignan started to behave in a riotous manner. The Prisoners hurled hundreds of missiles directly at officers, damage the inner Holding Bay fences and exited the confined area. They then focused their attention on gaining access to the gate that allows exit from the location by using several items to hit the gate, but they were unsuccessful in their attempt.

At the time of this occurrence the were 558 prisoners in the facility while a total of 80 personnel from prisons, police and fire Service was now working at restoring calm to the facility. Several attempts were made by officers and ranks to enter the location with the use of shields, but the large number and size of the missiles caused them to retreat to a point of safety.

As darkness approached, the prisoners continued to throw various missiles damaging four perimeter lights. They then started to set fire to items. Mattresses and pallets were placed along the inside of the fence and set ablaze. The fires caused damage to the monitoring room with the CCTV cameras.

After repeated attempts to have the prisoners desist from their riotous behavior failed, officers reverted to the use of rubber pellets. As this approach also failed, various calibers of live rounds were directed in the air. This resulted in a calm as eight prisoners were hit by the pellets.

The prisoners at Lusignan then became relatively calm and requested an audience with the Director which was facilitated. During this engagement, efforts were made to understand what prompted such action on the part of the prisoners. From Holding Bay One and Two, mention was made of seven prisoners not receiving lunch, issues ranging from the physical infrastructure of the facility to length of imprisonment and the way some junior ranks deliver their duties. These concerns were noted by the Director of Prisons Mr. Gladwin Samuels, and actions will be taken where necessary.

However, at about 9:15  PM some warm tea was issued since the prisoners had destroyed the food that had been prepared for dinner. The situation remained calm up until 11 PM when the  standby units were increased since prisoners from Holding Bay One and two started breaking the inner fence.

Nevertheless, that stopped about 12:30 am Tuesday and the facility currently remains under control as authorities continue to secure the facility.

2018-10-16
Denis Chabrol
Previous: Govt exploring all options to block increase in Berbice Bridge tolls…”there will be no fare increases to the people of Berbice”- Patterson
Next: Three held with guns, stolen items following Parika robbery