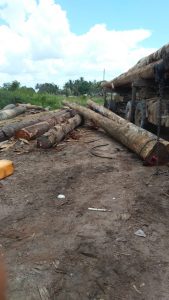 A labourer was crushed to death by a log that fell off a truck on Thursday at a sawmill and lumber yard at Linden, police said

Police were told that the incident occured at about 8:30 AM at  R.I Forest Products, Sawmill and Lumber yard at 26 Blueberry Hill Wismar, Linden. The business is owned by Raymond Prepont.

Investigators were informed that Braithwaite was servicing one of the trucks in the compound.

“He then went to another truck which had logs being off loaded, to draw fuel from the tank to put into a filter. It was while in the process of extracting the fuel that one of the logs slide off the truck and pinned him to the ground across his abdomen and thighs causing his intestine to protrude” police were told.

Employees rushed to the scene after hearing one of the logs sliding and a short scream, but they were too late. “They managed to removed the log off from the deceased and rushed him” To the hospital.