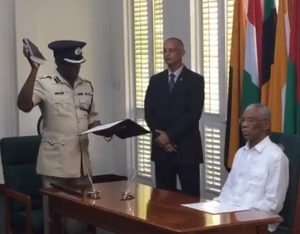 “In addition to his other duties, therefore, I expect the new Commissioner to lead the process of security sector reform which is aimed at ensuring that we have a highly motivated and better equipped, professional police force,” Granger said shortly after James took the Oath of Office.

No media advisory was issued to the general media, as is usually the case, and only preferred media houses were invited.

Vowing that his administration would not tolerate any efforts to retard reforms, he said the appointment of the quintet paves the way for the force to be “more efficiently managed”, including having a system of succession planning including training in preparation for high office.

“This government will resist any attempt from any quarter to reverse, retard or to thwart the reforms on which we are about to embark and I look to this new team to promote those reforms vigorously to ensure that from year to year will see that the Guyana Police Force indeed is there to serve and protect them,” the President said at the swearing in of James at State House.

“The police force has to be reformed and you can’t build a new house with old wood. You have to select new materials, people with a new vision, people with a new commitment to break from the old bad habits and to return to the principles of good policing,”  Granger said.

Hicken and Chapman were present during the swearing-in.

Opposition Leader, Bharrat Jagdeo earlier Thursday related that Granger told him during the consultations that there were certain undisclosed reasons why Ramnarine was not considered.

The President specifically singled out public trust as key ingredient for the Guyana Police Force to gain the confidence of Guyanese at a time when Venezuelan refugees were continuing their daily stream across the border, the arrival of aircraft in southern Guyana with “strange substances”, contraband, gun-running, narcotics trafficking, violence against women and robberies.

Granger expressed concern about the involvement of a small number of policemen in illegal activities.  “Unfortunately, too many rogue policemen have been found to be involved in these crimes,” he added. “Never before have the police been so badly used that many of them were accused of being complicit with narcotics traffickers, gun runners, tax evaders and assorted smugglers. They are not many but those few have given the police a bad name,” he added.

The President expressed confidence that the five-member team would help the public to regain public trust in the Guyana Police Force through its independence and impartiality. “The Office of Commissioner of Police is not a toy, it’s not a trinket, it is not a tool of political favour or patronage. The very security of the State, the safety of the Guyanese people rest on the police force and the officers who command it,” he said,

2018-08-30
Denis Chabrol
Previous: No views on Police Commissioner, Deputies due to lack of info- Jagdeo
Next: Govt searching for more cash to pay teachers- Granger