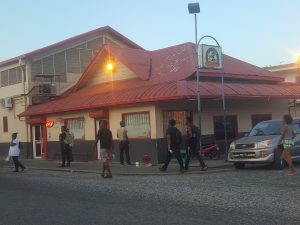 “Nobody is injured. Everybody is safe and sound,” a reliable source told Demerara Waves Online News.

A well-placed source said the man robbed the entity of an undisclosed sum of cash.

None of the customers was robbed, but the bandit escaped with monies from the cashiers, the source said.

Up to late Wednesday afternoon, investigators were still at the supermarket collecting evidence. The supermarket reopened for business later.